Berkshire Hathaway had exceptional performance so far this year. We use quantitative analysis of its stock returns to provide some clues.

This past Saturday, April 30th, Berkshire Hathaway investors met for their annual meeting in Omaha – the first in-person meeting since the start of the pandemic and they had plenty to celebrate. Berkshire stock (BRK.B) gained 8% this year through April vs. a 13% loss for the S&P 500 Index. But ironically, while everyone looked to Warren Buffet and the recently released quarterly report for clues explaining their fantastic performance, the investors should have been thanking themselves.

Berkshire Hathaway is a publicly traded holding company. It has both a book value of its holdings, and a market price reflecting investors’ consensus (rather than the actual market value of its holdings), and they don’t have to agree. Similar to a closed-end fund, Berkshire’s stock could trade at a premium (or a discount) to the market value of its holdings, and a large discount for a closed-end fund could trigger a buyout/takeover. For years investors have been trying to replicate Buffet’s success in one of two ways: some try to mimic his investment style by piling up on generic “moats” (NYSEARCA:MOAT) – a term attributed to Buffet himself, while others simply try to replicate Berkshire’s holdings (NYSEARCA: XLF, QUAL).

But the truth is that, similar to Keynes’s beauty pageant paradox (where the consensus of opinions, rather than that of any individual observer or any of “objective” qualities of contestants, determines the winner), Berkshire’s stock price is, like all stocks, determined by the investment public’s perception rather than its SEC filings. As such, to properly evaluate Berkshire’s stock, one needs to assess what other market participants think about it.

How might one go about doing this? Well, if one were to figure out the jury’s methodology in selecting a winner in a beauty pageant, one could regress the results across individual contestant attributes. In this case, the jury is the market and the attributes are exposure to different market factors. The prize? Berkshire’s stock price.

This approach – Returns-Based Style Analysis – was developed by Nobel-prize laureate William Sharpe in the early 1990’s to quantitatively explain the returns of investments through exposure to different market factors. MPI built upon this approach to create its patented DSA model for  use with dynamic and/or opaque investments such as hedge funds, endowments, private equity and conglomerate stocks such as Berkshire.

In the chart below, we present the results of such an analysis: each color band represents exposure weights to various S&P 500 sectors that best mimic the monthly performance of Berkshire Hathaway (BRK.B) over the past five years. Please keep in mind that this analysis is in-sample, as we’re trying to understand what currently drives Berkshire stock performance, as well as previous periods. 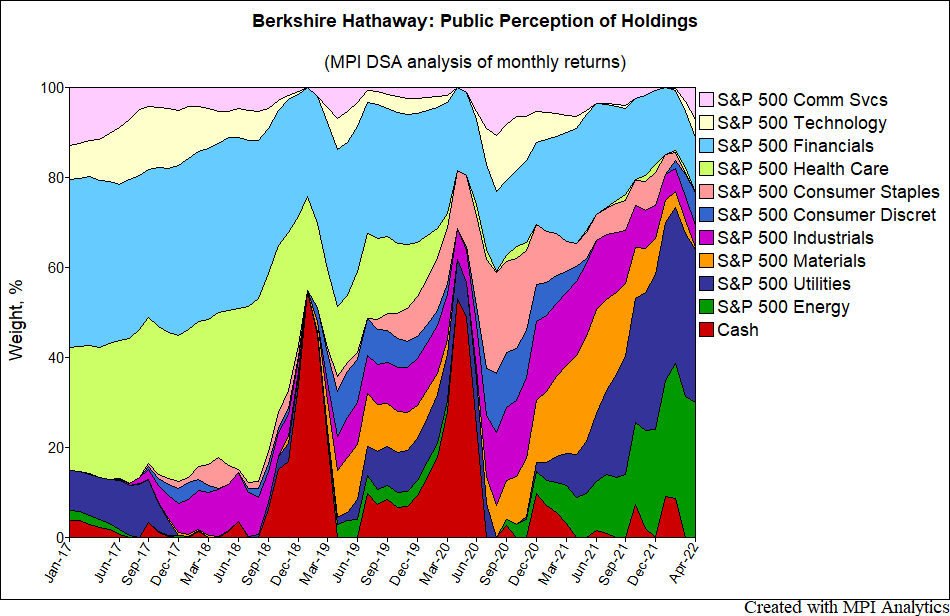 As seen below, the quality of this analysis is high and the “Public Perception” sector portfolio described above tracks the stock very closely. 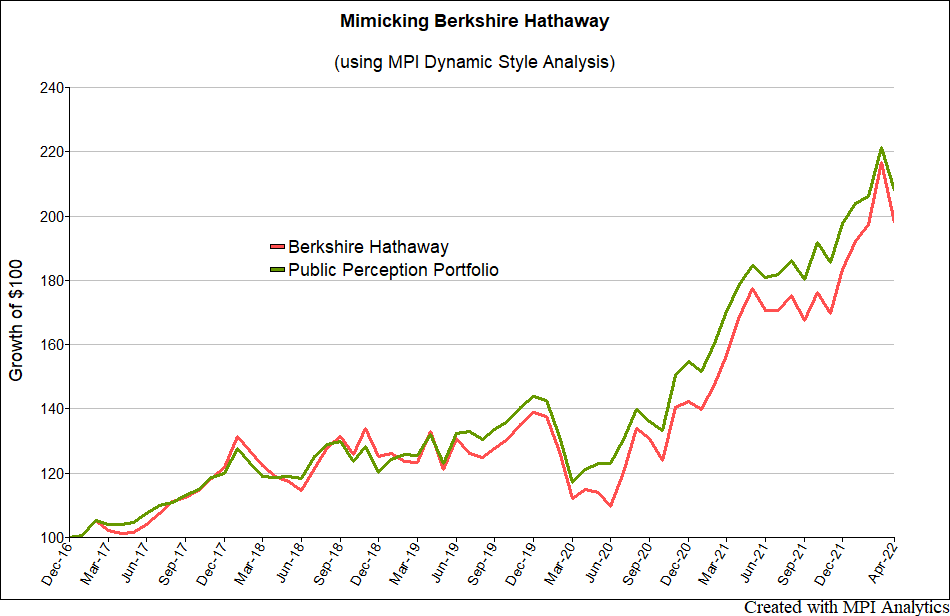 Surprisingly, we don’t see a significant exposure to the financial sector. BRK is known to have significant private insurance holdings, and some of its largest investments in public companies are in the American Express Company (AXP; $28.4 billion) and Bank of America Corporation (BAC; $42.6 billion.) Plus, Berkshire Hathaway itself is a part of the S&P 500 Financial sector.

We also don’t see any significant Technology exposure in the Public Perception portfolio in 2022. This seems strange given that Berkshire holds about $160B in Apple (AAPL) stock, not to mention investments in other tech companies like HP (HPQ).

What a change from five years ago, when public perception was mostly defined by the Financials, Health Care, Technology, and Communications sectors. The investment public now seems to view Berkshire as a deep value portfolio of its non-public investments made up predominantly of energy, and utilities sector, followed by financials. (Think GEICO, Berkshire Hathaway Energy Company (“BHE”) and Burlington Northern Santa Fe, LLC (“BNSF”), which operates some of the largest railroads.)

What makes DSA’s returns-based technique unique is its ability to accurately identify rapid changes in exposures. Everyone knows that there have been two times in recent history when Berkshire hoarded cash: $116B in 2018, and $128B in 2022 (right before the Covid-19 crisis). DSA was able to accurately identify both ‘hoarding moments’ by the spikes in cash in the “Public Perception of Holdings” chart above.

As for the 2022 performance puzzle, we looked at the breakdown of the total performance of BRK.B and S&P 500 annually over the past three years. The Energy, Utilities and Insurance sectors clearly propelled the company into record territory. There’s also a portion of the Berkshire 1Q22 return that our model couldn’t capture (individual company or stock selection) – a premium that investors’ jury “awarded” to BRK holdings vs. the diversified market indices that we used to proxy their performance. 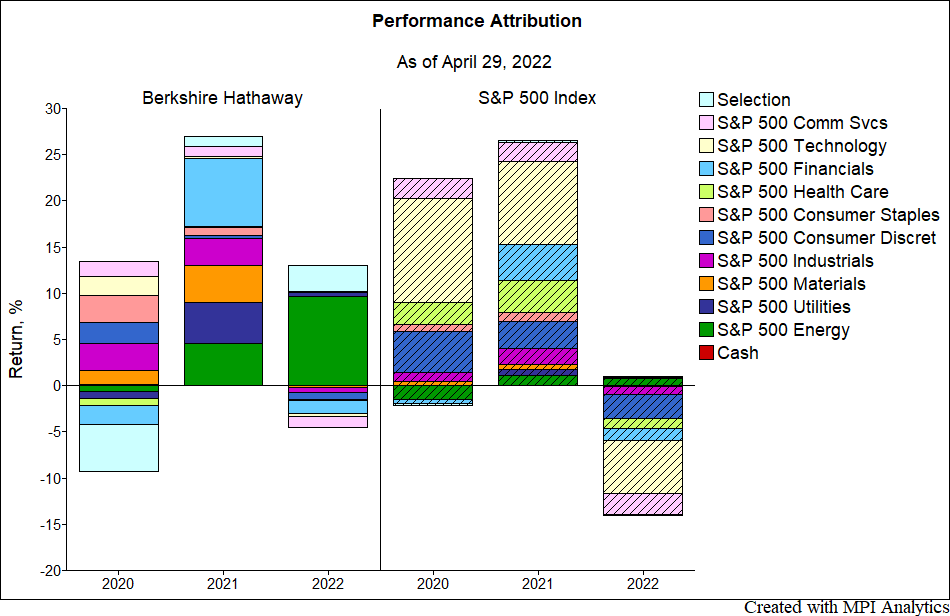 In other words, there’s no magic behind this beauty pageant: the stars were all lined up in the first quarter of 2022 for Berkshire’s stock to deliver positive returns. Every economic sector other than the ones dominating the public’s perception of the BRK had negative returns which caused the overall market to significantly underperform.  But when investors looked through their market ‘telescope’ at Berkshire, they clearly saw what they liked – shrugging off any notion of technology exposure and earning first prize in a beauty contest of which they themselves had been the judge.