PIMCO Income fund had some of the largest by size exposure to Russian debt. We use quant tools to monitor daily the size and impact of this segment on the fund's performance from the start of the Russian attack on Ukraine.

Russia’s attack on Ukraine led to global economic sanctions that have caused the collapse of both the ruble and Russian bond ratings. With a default looming, a lot of Russian debt holders in the U.S. are now facing significant risks. According to Financial Times, PIMCO was among a group of global investors (as of the end of 2021) with some of the largest exposure: $1.5bn in Russian sovereign debt and about $1bn in credit default swaps (CDS), with the majority of CDS held by the behemoth $140bn PIMCO Income Fund (PIMIX).

Bloomberg reports that Russian CDS valuations currently assume a 70% probability of default this year. Now, for both fund investors and risk managers alike, it’s important to understand the effective exposures daily as the crisis unfolds – especially with derivatives such as swaps. Unfortunately, this is almost impossible to do without knowing the exact terms of each of the thousands of derivative contracts in the PIMIX portfolio. But a clever quantitative technique exists to provide an accurate estimate of such risks using the fund’s daily NAVs.

Several years ago, we introduced a factor model for PIMIX and the other similar “go-anywhere” bond funds that Morningstar labels as “multisector”. This comprehensive model shed light on PIMCO Income Fund’s spectacular 9-year run and tied it to a timely bet on illiquid non-agency mortgages. In 2020, we used the same model to explain the fund’s volatility during the COVID crisis.

In our current analysis of the PIMCO fund (which starts in 2020, where the last one left off), we augment our model with the Russian Government Bond Index from ICE/BofA to sense the dynamics of exposures to Russian debt. We proxy emerging markets with JPMorgan’s EMBI Global Core index, which tracks the more liquid issues and includes Russian bonds. Even though these two indices overlap, Russian debt, while being a small fraction of the EMBI index, makes up the approximately 2% allocation (counting CDS exposures) in the $140bn fund. One note: JP Morgan announced recently that they will be removing Russian debt from their indices at the end of the month – another reason to have it as a separate factor in the model.

The results of the Dynamic Style Analysis of the fund’s weekly NAVs are shown in the area chart below where different colors represent the varying exposures to fixed income factors. 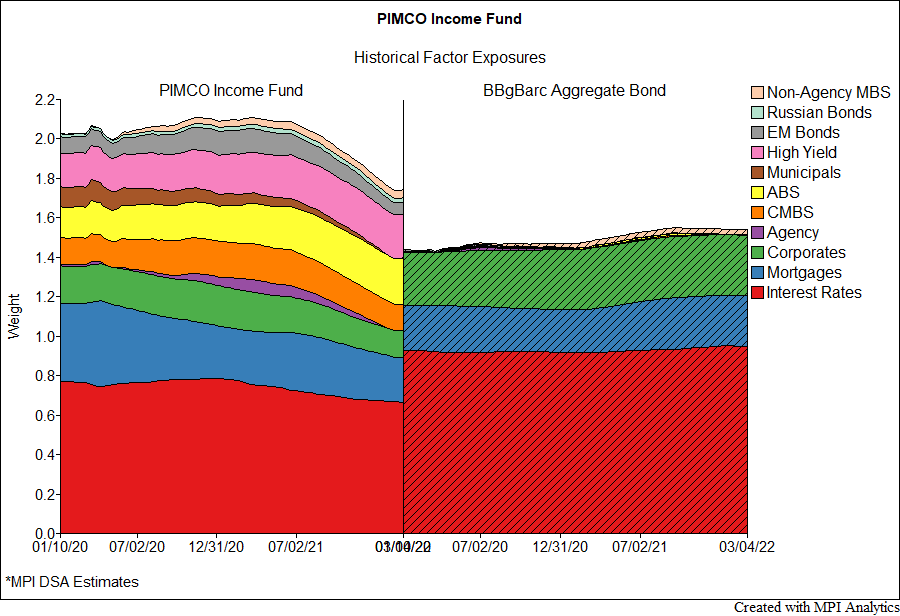 First, we note that the risk profile of the fund is very different from its benchmark (the Aggregate Bond Index), with the bulk of exposures in illiquid non-agency mortgages; high yield and asset-backed securities; and emerging market bonds – none of which are found in the benchmark. At the same time, the fund has much less interest rate risk that the benchmark and we see a noticeable “de-risking” trend that started after the PIMCO fund sustained significant losses in the COVID crisis.

As the chart below indicates, our model tracks PIMIX performance amazingly well. Both the R-squared and Predicted R-squared (our proprietary cross-validation statistic borrowed from machine-learning) are above 95% indicating high quality analysis. 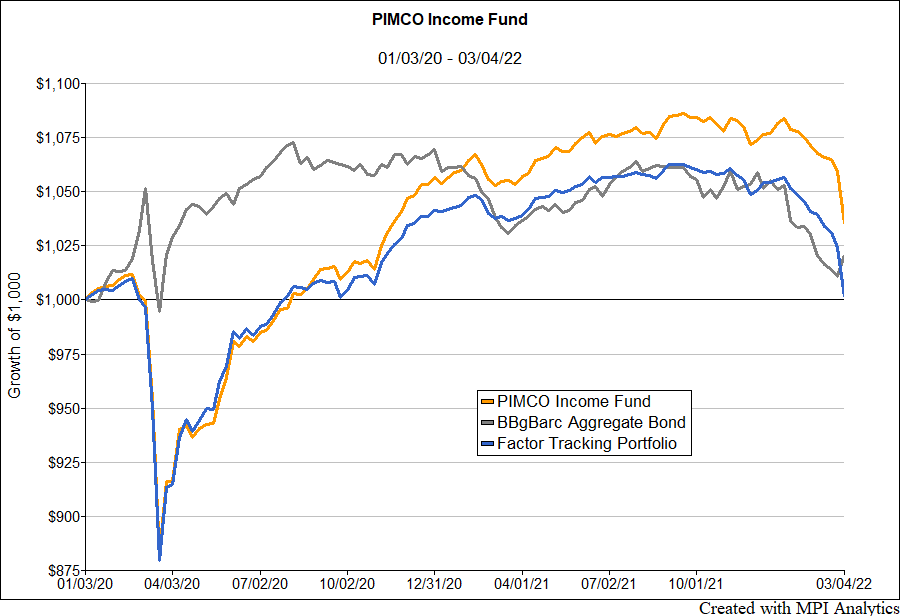 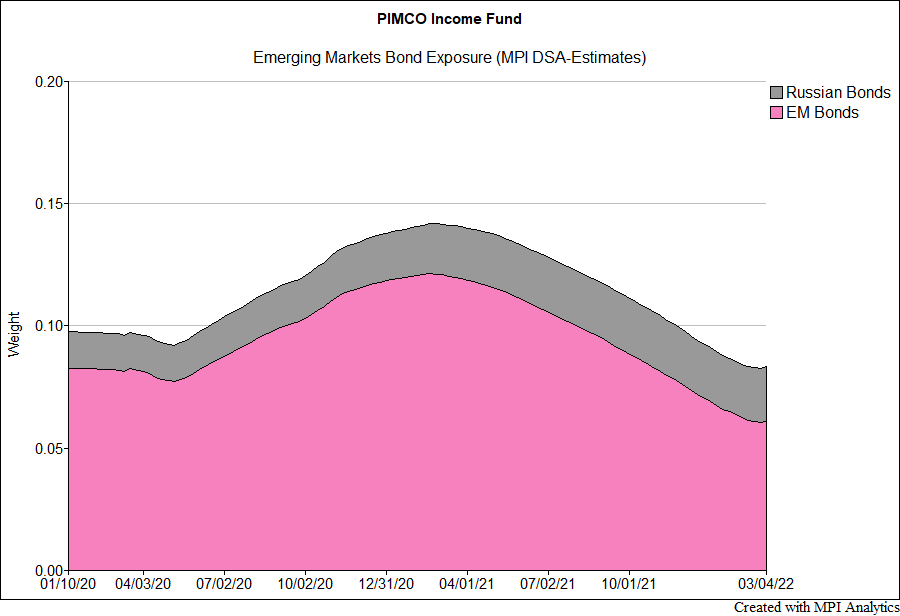 What is puzzling is that the DSA-estimated exposure to Russian bonds – approximately 2% – is stable and even increasing despite the fact that Russian bonds lost over 90% in value since the war in Ukraine started on February 24th.

One reason for this apparent increase is that our return-based estimates represent what traders call “beta-adjusted exposures.” These carry much more pertinent information than the allocations alone because they show what position size is required to hedge out the risk. Therefore, if the fund held proportionally more risky Russian bonds than the index, the risk-adjusted exposure to the less-risky index has to increase.

Another reason for the increase in Russian debt exposure is the fund’s significant positions in Russian credit default swaps. As the probability of default increases, so does the exposure to the underlying debt.

In the chart below, we use our exposure estimates to provide a rough explanation of the fund’s performance this year.

Through March 4th the fund lost 4.5%, of which we estimate the exposure to Russian debt contributed the most (-2.6%). However, given that the Russian CDS already factored 70% probability of default, and the fund’s Russian bond positions lost over 90% of their value already, there’s not much additional risk coming from this factor.

MPI’s Dynamic Style Analysis, coupled with higher frequency data (daily or weekly), allowed us to accurately estimate the dynamic of exposures of a complex fund without the need of pricing and modelling hundreds (if not thousands) of derivate contracts. And, as the crisis unfolds, we will be helping our clients to perfect the factor model to monitor this and other funds and their evolving exposure to Russian debt.