Using our analytical tools and publicly available endowment annual performance data, we project FY2019 performance of large and small endowments, as well as the Ivy League average and Yale

Months prior to all endowments turning in their fiscal year 2019 grades, or returns, it is possible to estimate how the average endowment performed with a significant degree of accuracy. It is also possible to project FY2019 performance of smaller groups of endowments, like the much-watched and imitated Ivies, as well as individual systems, such as Yale.

Through the use of advanced quantitative tools and techniques – like those used to analyze and monitor illiquid investment strategies that report infrequently without significant transparency, such as hedge funds and, increasingly, private equity, venture capital and real estate – endowments, foundations and OCIOs can better understand the factors driving the performance and risk of their portfolios, and that of their peers. 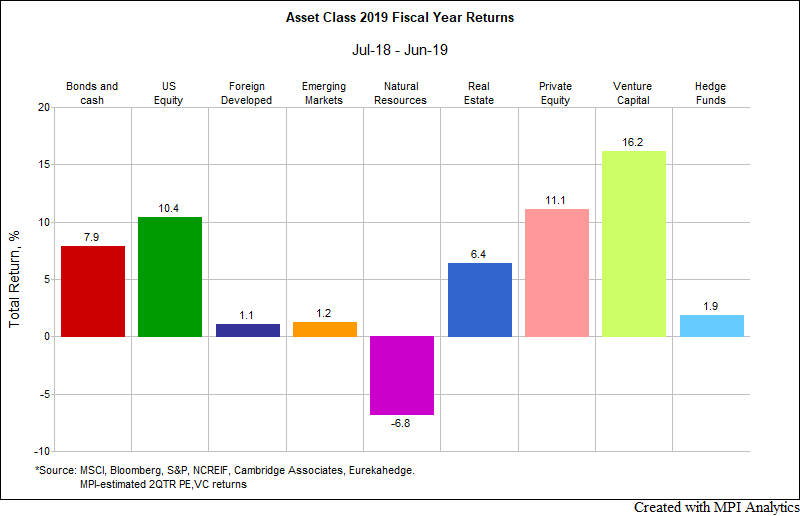 Using performance data from NACUBO’s FY2018 report and an analysis of 2018 asset class exposures of the average large (>$1B), medium-($501M-$1B) and small ($101M-$500M) endowment that we recently conducted for a story on the Yale Model by Institutional Investor using our proprietary Dynamic Style Analysis model (DSA), we then pulled those factor exposures forward through June 30th to provide estimates of FY2019 returns[2]. This gives us an estimate of 7.2% for the average large endowment, 6.3% for the average medium endowment and 6.0% for the average small endowment[3]. Elite school systems, as proxied by the Ivy average, look to have done better than other large endowments, though still underperforming a 60-40 portfolio. It is worth noting that our projections are gross of some management fees and operating expenses so that the actual results – when reported – may appear lower[4]. 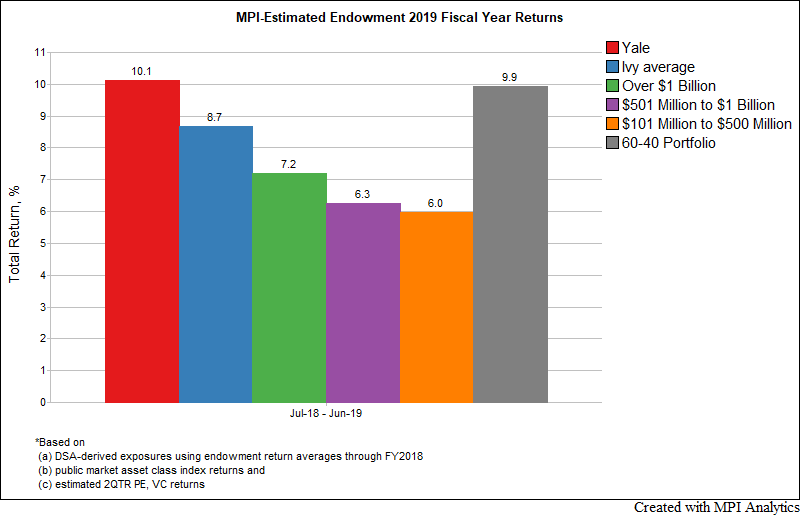 The average of these averages (ex-Ivies) reflects early reports of the endowment universe. Wilshire, via Bloomberg, recently reported that endowments returned 5.9% in the fiscal year ending June 30th, according to the Wilshire Trust Universe Comparison Service’s recent quarterly survey of institutional investors, which provides a representative sample of the endowment investing space.

These results significantly lag a 60-40 portfolio[5]. Indeed, smaller endowments appear to have much bigger exposure to public equities and bonds according to our analysis, and as such performed better than larger (>$500M) endowments that reported to Wilshire TUCS (schools >$500M returned 5.3% on average). In the universe of schools reporting to Wilshire, larger endowments’ allocations to private market assets and strategies, which tend to be correlated with an endowment’s size, seem to have been unable to offset lower average allocations to domestic stocks and bonds.

Remarkably, DSA-derived factor maps provide us with an additional level of transparency unavailable otherwise, allowing one to understand specific sources of over/under performance. A detailed breakdown of FY2019 estimated performance attribution to each asset class segment is shown below. Exposure to hedge funds, foreign equity and natural resources were the major sources of performance drag. 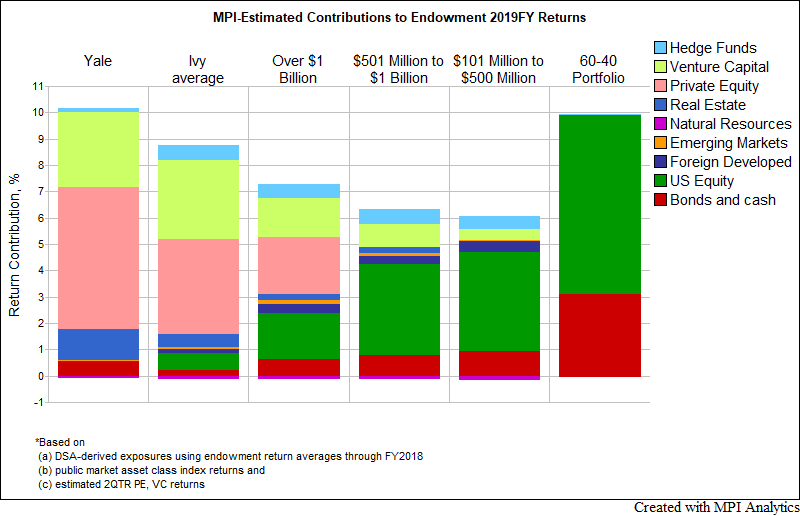 Our higher than reported averages estimated for mid- and large-endowment systems may be indicative of NACUBO’s broader sample size than the Wilshire study and the fact that our estimates are gross of some fees and expenses.

FY2019 saw a dramatic correction followed by a swift recovery in domestic stocks driven by a suddenly patient and accomodative Fed, and, relatedly, a volte face in fixed income markets with expectations for rates flipping from tightening to easing. Variations from benchmarks and increased allocations to risk mitigation strategies, like hedge funds, or reallocating domestic equity exposure to lower valuation segments of the global stock market, namely foreign developed and emerging markets stocks, would have challenged performance relative to a passive 60-40 portfolio.

Given these market dynamics, even though annual results are positive for all endowment types, we thought it would be interesting to see the impact the 4th quarter 2018 market downturn had on endowments. Using quarterly asset class performance, we estimate the intra-year performance of endowment averages. In the chart below, we show estimated quarterly returns for each endowment size segment, the Ivy average, Yale and the 60-40. Note the lower estimated drawdowns for Yale, the Ivies and large endowments, and the way they then appear to lag in the recovery that unfolded over the 1st half of calendar year 2019, especially Q1. 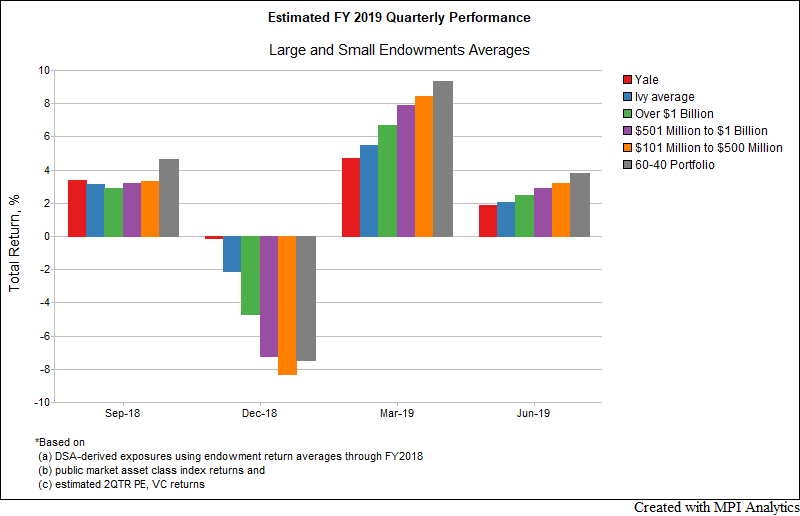 And cumulative intra-year performance, below, shows how each group rebounded in the first two quarters of (calendar year) 2019 with the 60-40 landing at the top. 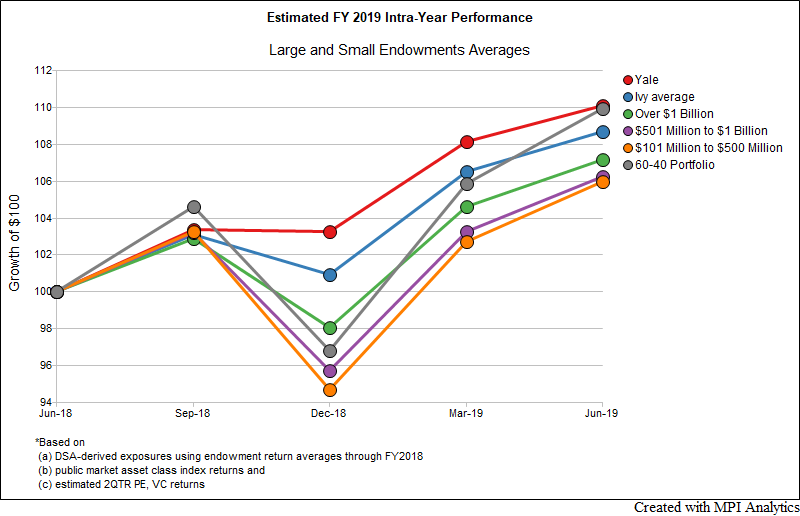 The Yale Model, Private Assets and the Ivies

Yale and other Ivies were likely not impacted as much as smaller endowments during the correction given their outsized investments in private assets with book-value rather than market-driven accounting. As we’ve shown in our earlier research, however, investors can estimate the true risks of private assets given proper techniques.

Our projections suggest the Ivies – and other elite, typically large endowments adhering to the “Yale Model” – benefited in FY2019 from their high exposures to private market assets, particularly private equity and venture capital, offsetting lower allocations to U.S. equity and fixed income. Though the average large endowment has increased exposure to private market strategies over the years, the benefits were unable to surmount challenges in FY2019 from elsewhere in the average portfolio, with relatively deep underperformance to the 60-40’s 9.9% return.

Still, our estimates suggest the Ivies won’t continue their two year streak of outperforming a domestic 60-40 portfolio. Individual systems with exceptionally high exposure to PE and VC, like Yale, however, could come close to the 60-40 benchmark. Indeed, we project Yale to slightly outperform a balanced portfolio with a return of 10.1% (albeit gross of some fees/expenses – which could be significant for private assets!). We’ll sit tight while results come in (and will produce an end of year report as we’ve done since 2015).

But the point is, investors, directors and consultants don’t need to wait; with only annual data points, powerful quantitative tools that take a top-down view are able to give startling clarity into the behavior and returns of large, diversified and opaque portfolios in near-real-time.[6]

[1] Since PE and VC 2QTR returns are not yet available (we use Cambridge Associates Private Equity and Venture Capital Indices) we conservatively estimated performance at 2%.

Note that we await second quarter 2019 data for the PE and VC indices from Cambridge and conservatively estimated performance of 2%.

Also worth noting, this method assumes no allocation changes, and relies on a large sample size and diversified portfolios that won’t shift significantly in aggregate each year.

[3] DISCLAIMER: MPI conducts performance-based analyses and, beyond any public information, does not claim to know or insinuate what the actual strategy, positions or holdings of the funds or companies discussed are, nor are we commenting on the quality or merits of the strategies. This analysis is purely returns-based and does not reflect actual holdings. Deviations between our analysis and the actual holdings and/or management decisions made by funds are expected and inherent in any quantitative analysis. MPI makes no warranties or guarantees as to the accuracy of this statistical analysis, nor does it take any responsibility for investment decisions made by any parties based on this analysis.

[4] Public market indices are gross of fess as well as the NCREIF index that we used as a proxy for private real estate. As such, we expect actual results to be somewhat lower than projected. The indices used for private equity, venture capital and hedge funds are net of fees.

[5] For this measure of a traditional balanced portfolio that is typically used by pensions to benchmark performance Wilshire used the Wilshire 5000 Total Market Index to represent U.S. equities and the Wilshire Bond Index for fixed income. That said, the result (9.1%) is similar to the 9.9% return of a domestic 60-40 portfolio using the S&P 500 Index and Bloomberg Barclays U.S. Aggregate Bond Index, rebalanced quarterly, which we calculated. As we’ve discussed before, the composition of the average endowment, and even pension, is often significantly varied from U.S. public equities and fixed income but it provides some measure of what a simple, liquid, low cost and diversified model could attain relative to the complexities, illiquidity and higher cost of the Ivy or Yale endowment model. For brevity, we are not suggesting an alternative, more appropriate benchmark in this piece of research.

[6] Since Brinson’s work in the 80’s, it has been more or less accepted that asset allocation determines most of the volatility of a large pooled investment such a pension or endowment portfolio – primarily due to the powers of diversification. This means that the risk profile of such macro portfolios can be estimated accurately and the bulk of performance can be attributed to asset classes rather than manager-specific allocations. But once one takes in consideration the dynamic of such a portfolio and adds more granular assets, it is also possible to estimate performance of such a portfolio when position information is not available. In the award-winning paper titled “Monitoring Daily Hedge Fund Performance When Only Monthly Data Is Available” written in collaboration with Prof. Russ Wermers, it was shown that, even for a portfolio of hedge funds, it is possible to accurately estimate intra-month performance once the dynamic analysis and proper calibration technique is used. We then applied this technique to project the daily performance of one of the Bridgewater’s funds. With endowments, very little information is known about specific investments and performance data is available only annually with a significant delay. It is desirable to estimate quarterly performance both intra-year and for the period for which information is not yet available. Some of these portfolios are very large and diversified, especially when it comes to averages of a large number of endowments – dozens or even hundreds as in the NACUBO study – which makes such an analysis possible.