We use our tools and proprietary dynamic factor model to analyze Renaissance RIEF to gain insight into the results in the first quarter of 2020.

March was an extraordinary month that shattered many records. The VIX set it’s highest ever close of 82.69, beating its previous high of 80.86 set in November 2008. The measure of implied volatility also closed north of 60 for ten consecutive days, beating its 2008 record of eight straight closes > 60. That turbulence resulted in the triggering of 4 circuit breakers, the first time a breaker was tripped since LTCM and the Asian Crisis in 1997. The month recorded the largest single-day loss since Black Monday in 1987 the worst weekly loss since 2008 and capped off the worst first quarter in history. March also marked the end of the longest-ever bull market, with the March 23rd S&P 500 trough (so far at least), of -34%, being the fastest ever bear market (drop of 20% from peak on Feb 19) and the fastest ever 30% drop.

Many hedge funds were hurt in the mess that was the first quarter, with investors wondering what part of “hedge” their managers missed. One was Renaissance Technologies Institutional Equities Fund (RIEF), which lost -14% in the first quarter, according to Bloomberg News.

Bloomberg reported, “RIEF holds stocks for weeks or months in an effort to outperform the S&P 500 with less volatility. RIEF targets a beta of no more than 0.4, meaning a 10% drop in the S&P 500 should translate into a loss of 4% or less.” Over the first quarter, Bloomberg notes the “S&P 500 fell 20%. RIEF slid about 14% for the quarter, according to the person. Had RIEF stayed within its targeted beta, the maximum loss would have been 8%.”

We decided to take a quick look at RIEF, as we have in the past (here, here, here and, originally, here). We analyzed the fund’s returns with the  three-factor Fama/French model and MPI’s proprietary Dividend Factor1 that we use to model RIEF and some other quant funds. To arrive at estimated factor exposures we utilized Dynamic Style Analysis which is available in the MPI Stylus Pro research platform.

The first chart below shows the factor exposures that appear to drive RIEF’s behavior, presented dynamically over the past 3+ yrs (January 2017) to present. The second chart shows both cumulative returns of RIEF and a hypothetical factor portfolio invested in all four factors in proportions equivalent to the factor exposures identified in the first chart – assuming all factors are investible and there are no fees or expenses charged.  The third chart shows how the modeled exposures may have contributed to returns in 2020.2 At about 0.7, RIEF’s market exposure (beta) appears to be consistent over the past several years (“Market” in chart below, orange), and consistently above 0.4. 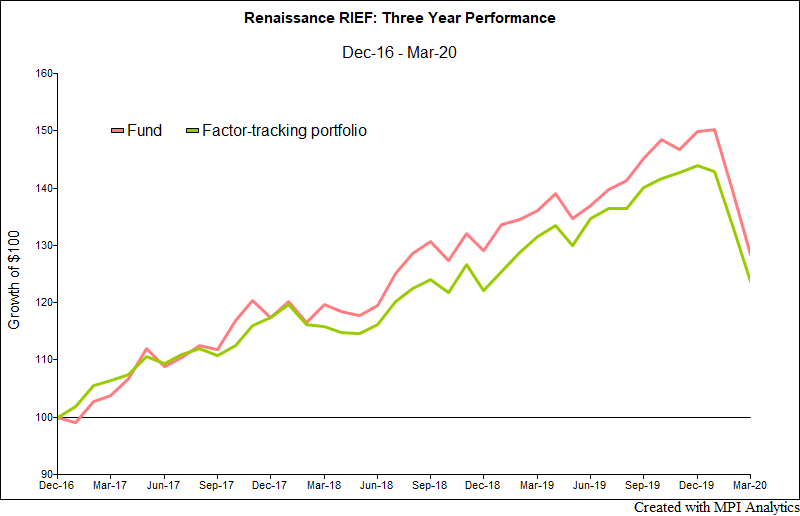 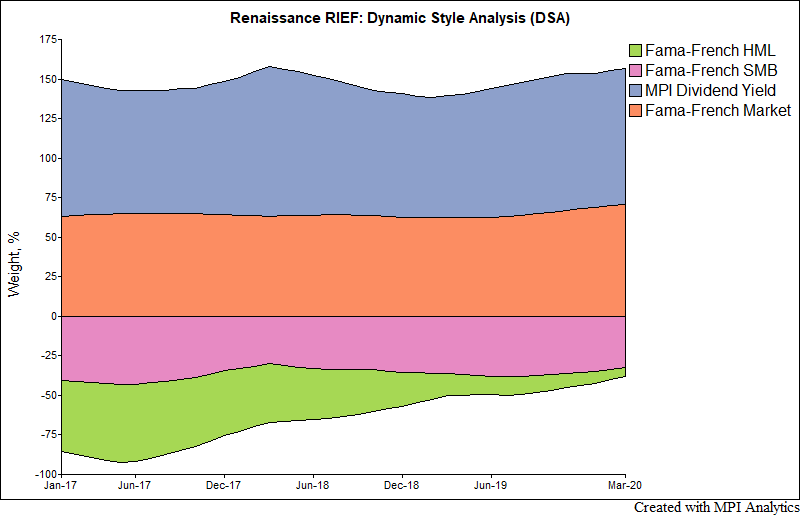 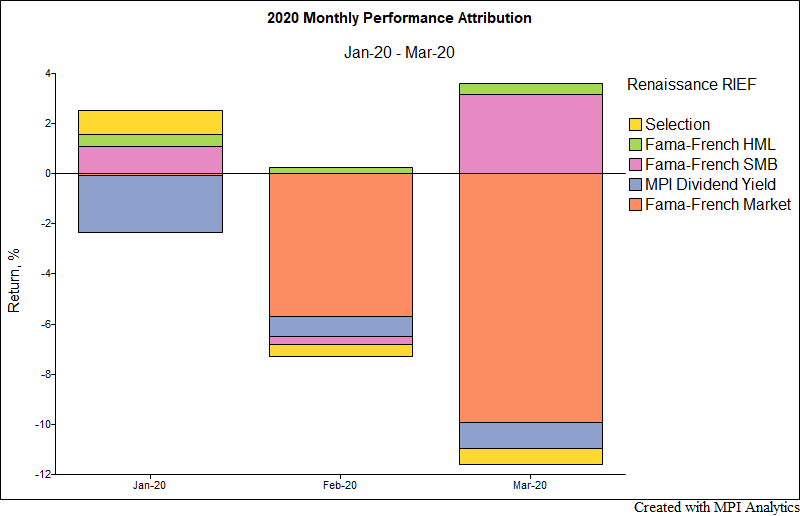 The Market exposure seemed to be the dominant contributing negative force in Q1, while the contributions of the other factor exposures were mixed. The exposure to Large-cap stocks (consistent short exposure to Small Minus Big, pink) looks like it worked quite well to offset losses as Large-Cap equities have continued to outperform their smaller counterparts. But the modeled gradual shift of exposure going from Growth to almost style-neutral (value factor HML – High Minus Low, green), played against them so far this year as Value was decimated in the first quarter as is evident from the chart below. 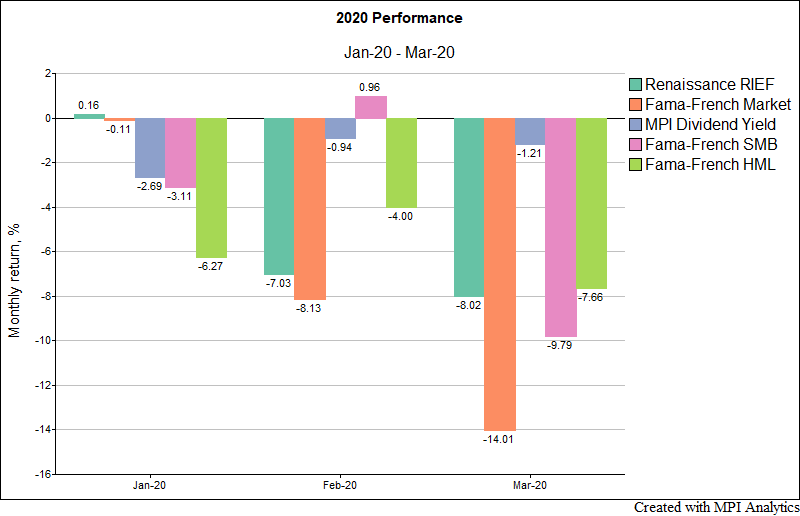 Bloomberg notes an update in RenTech’s summary of risks: “Circuit breakers can affect futures markets, making it difficult to trade or liquidate positions, potentially resulting in ‘significant losses,’ Renaissance said in its filing.”

For all the discussion of circuit breakers, if the exposures stayed where they were in 2017, and if market beta were lower, the fund’s losses would likely have been lessened.

Please fill the form below: