Chasing Top-Rated Funds: Why Are We Investing In Outliers?

In this post, our research team examines why investors should proceed with caution when selecting top-ranked funds.

This is the second installment in a multi-part research series on fund ratings. In this series, we will use proprietary functionality leveraged by our clients to develop custom fund rating systems.1

In the first installment of this series, we discussed the volatility of 10-year fund ratings as the last of the Global Financial Crisis (GFC) faded from the historical window. Now, we’d like to address in more detail one of the reasons this happened.

The reason, in a nutshell, is that fund ratings―based on any statistic―identify outliers. Naturally, you might say, that’s the idea. And it is―to an extent. But the why matters. Are the top funds consistent superior managers? Did they make a shrewd tactical allocation move at the right time? Or are they rewarded for something that has nothing to do with skill?

Let’s return to our illustration using the 10-year MRAR statistic calculated in MPI Stylus.23 We compute 10-year MRAR ranks and 10-year Beta vs. the S&P 500 Index within the Large Blend Morningstar category of about 700 funds that are currently active with inception January 2008 or earlier. We first compute over the 10-year window (January 2008 through December 2017), where most of the GFC is included, as seen in the below chart. 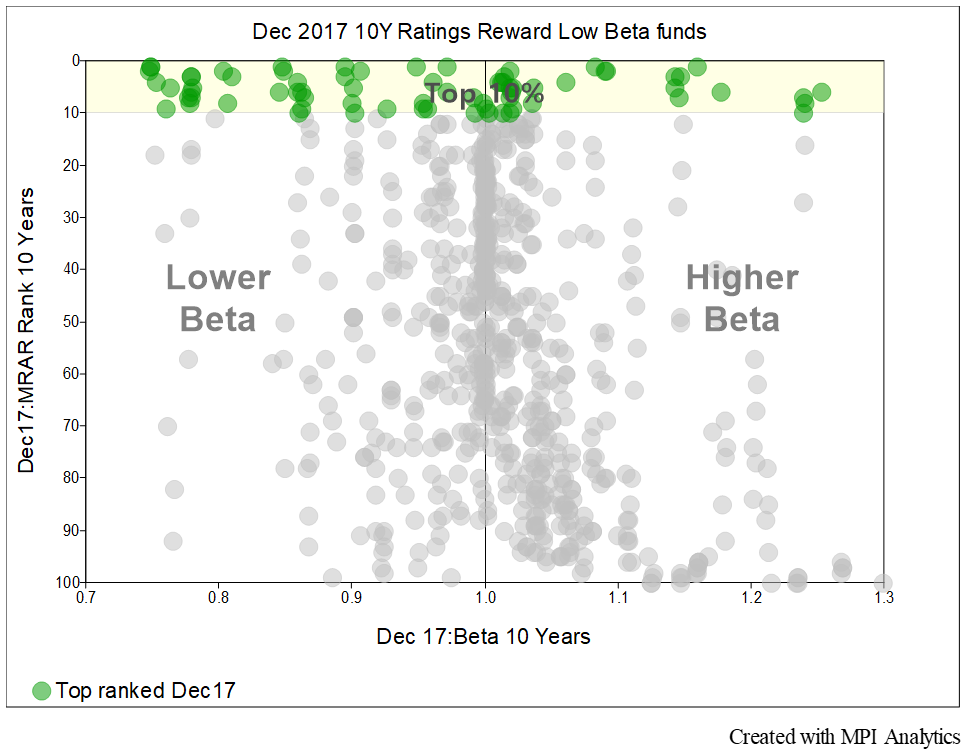 In the below chart, we calculate the same values between March 2009 and February 2019, where the GFC is fully excluded. On both charts we highlight in green the same group of funds: top 10% of funds ranked on 10-year MRAR as of December 2017.

These two charts produce a handful of observations:

The explanation is that, on average, funds with lower beta most likely had the smallest losses during the GFC. As we explained in our previous post, MRAR and other similar measures of risk-adjusted returns, like the Sharpe Ratio, are highly sensitive to large negative values and keep them in their “memory.”

As soon as the GFC is out of the estimation or ratings window of MRAR, Sharpe, etc., the ratings lever shifts to performance, and the funds with higher performance (many of which are, of course, high beta in a bull market) are pushed to the top.

A second way to look at this issue is illustrated in the two charts below. Again, we plot MRAR ratings over the same two 10-year periods vs. performance ranks in the same period. It is easy to see that while the GFC is “in the window” a lot of funds with lower performance (left edge of the charts) are rated highly from a risk-adjusted basis (top of the charts) because of the significant value given to their low risk.

Once the GFC is “out of the window,” as seen below, the relationship between 10-year MRAR ratings and total performance ratings is almost linear with very few exceptions (below the diagonal), and all top-10% ranked funds on a risk-adjusted basis are in the top-20% by performance. In other words, by many measures, right now, some of the riskiest funds are being rewarded without penalty in typical rating systems.

As stated at the start of this post, top-rated funds are outliers by definition. Some may very well be the outliers we’re all looking to identify. As we’ve just shown, however, some outliers are likely being rewarded or penalized simply for their nature as a more aggressive or conservative strategy. Others could be rewarded or penalized due to a simple misclassification. Consequently, there are good reasons to avoid a top-rated fund unless you know why it’s an outlier.

In our next post, we will delve into how to minimize the outlier effect highlighted above. To do this, we will apply our Common Style analytic, which assesses fund and portfolio similarities and differences to identify funds that could potentially be miscategorized.