Haunted by the ghosts of 2009, Harvard endowment's lower risk appetite still pays off with a 33.6% return.

Harvard’s endowment enjoyed a 33.6% return for the FY ended June 30, 2021 and now stands at $53.2 billion. By any measure, it remains the largest university endowment in the land. In most years, that would leave management with little to apologize for or explain.

But this last fiscal year was not like most; in fact, as endowment CEO N.P. “Narv” Narvekar observed in his FY2021 annual report, it was “an extraordinary year.” And that was certainly true if you were heavy in private equity and venture capital, like Harvard endowment’s peers Univ. of Penn and Bowdoin.

Harvard, though, marches to the beat of a very different drummer. They come by their lower risk appetite honestly and haven’t forgotten the 27.3% drop they faced at the end of FY 2009, the largest-ever decline driven by the Great Recession.

In fact, when COVID-19 came along, the university pointed out that they are ‘better prepared for a potential economic downturn’ than in 2008. Harvard University CFO Thomas J. Hollister specifically credited Harvard Management Company CEO N.P. “Narv” Narvekar for ensuring the “relative liquid” endowment status compared to 2008.

Despite this, Mr. Narvekar seemed to be a bit on defense in this year’s annual report. A lot of ink was spent explaining the well-known return tradeoffs that come with a lower risk appetite and he ultimately acknowledged that, “given the extraordinarily strong performance of the overall market this past year, a meaningfully higher level of portfolio risk would have increased HMC’s returns dramatically.”

It has been an interesting few years for Mr. Narvekar and Harvard. As we pointed out at the end of FY 2017, Harvard and Dartmouth had similar asset class contributions to their performance, but Harvard was pulled down significantly by selection with a 8.1% return compared to Dartmouth’s 14.6%.

At that time, we noted several mitigating factors, including internal decisions to unload private equity and real estate funds in the secondary market, markdown natural resources, and increase allocations to external managers.

We said at the time that, “given this, one could view Harvard’s 2017 performance as an anomaly that should go away once changes under the leadership of Mr. Narvekar are fully implemented.” But, as the chart below illustrates, Harvard has been unable to shake its spot at the bottom of the Ivy League endowments’ ten-year performance. 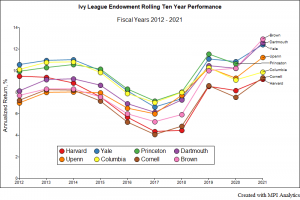 That being said, two notes in this year’s annual report should capture everyone’s attention. Early in Mr. Narvekar’s tenure, the endowment began a series of long-term ‘portfolio initiatives’ to (among other things) reduce exposure to natural resources, real estate, and public equities in favor of private equity and hedge funds. He recaps this in his latest report, and calls this initiative “essentially completed, given our current risk tolerance level.”

Per annual report the current endowment allocations seem to support the low-risk narrative:

How to Vet the CIO… Quantitatively

However, for an outside analyst attempting to a) verify the overall allocation trends without relying on the CIO’s word and b) compare allocations across similar endowments represents an impossible task without having access to full history of endowment allocations and portfolio positions. Without such information one might look for clues of manager selection and concentration – as was the case with Brown endowment which propelled them to the head of the pack for two consecutive years. For example, one could see that hedge funds in the Harvard’s portfolio returned 16% vs. 27.5% for the HFRI Fund Weighted Composite, while public and private equity sleeves outperformed their benchmarks listed below.

Such a discrepancy could be the result of strategy concentration or manager selection – and neither can be determined by just eyeballing FY2021 results. Luckily, a quantitative technique exists that utilizes both infrequent annual endowment returns and common market indices to create a forensic replication portfolio that produces similar annual returns with minimal turnover. Dynamic Style Analysis (DSA) plays crucial role in due diligence, regulatory surveillance and monitoring – identifying performance drivers of complex fixed income mutual funds, detecting glidepath deviations in Target Date Funds, pointing to hidden risks of hedge funds, and confirming allocation decisions of large pensions such as $1.4T Norges. Similar techniques help us to replicate the TOP50 Hedge Funds and TOP20 CTAs with liquid ETFs. But there we are able to utilize daily, monthly or quarterly market-driven data. Conversely, endowments present a serious challenge for such an analysis because of their infrequent reporting and focus on private investments.

The result of our analysis of Harvard is shown graphically below. The Replication Portfolio made up of passive market indices tracks the endowment’s returns very closely leaving very little to the impact of individual manager selection – not surprising for a $53B portfolio. 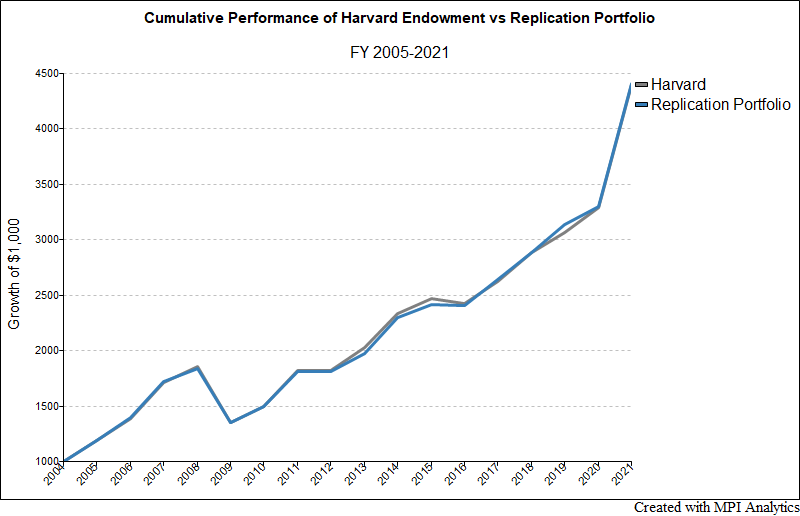 Each vertical line of the historical exposure chart below represents a historical snapshot-allocation of such a Replication Portfolio made up of market indices. By looking at the color bands, one could determine allocation trends that may or may not agree with the disclosed information.

Some trends seem to support the HMC report: there appears to be a growing appetite for less liquid asset class types (private equity, venture capital) and the high returns they can bring, while natural resources and real estate allocations exhibit steady decline.

However, estimated allocations to bonds and cash seem to be way off: our analysis shows over 30% bond exposure while reported allocations are 12%. Additionally, hedge fund exposure per our analysis is under 20% compared to the 33% stated in the report. One possible explanation is that the endowment’s allocation to hedge funds is more focused on market-neutral, credit and relative-value strategies rather than on net long equity strategies that dominate the HFRI index used as our analysis’ market proxy.

Whatever the reason, our analysis demonstrates how the fund behaves and what behavior to expect in coming years. Bond/cash exposure is telling and we observe from the above chart that Harvard’s bond exposure was dramatically reduced in the years leading to the financial crisis (this fact is supported by the annual reports for 2005-2008) and steadily increasing since 2014 to make Harvard’s allocation less risky than most of its Ivy peers.

In our 2017 Ivy report we noted that Harvard and Cornell had the second highest risk among Ivies after Yale. However, since then, Harvard’s bond exposure increased two-fold while most of their peers have dramatically increased their equity allocations.

In this year’s report, there is an obvious theme of feeling constrained by risk tolerance. In fact, the topic even gets its own section, and that brings us to our second point.

The HMC initiated a Risk Tolerance Group in 2018 and Mr. Narvekar notes that, “The findings and recommendations of our collective work will be reviewed carefully in the next several months… and the decisions will direct and inform our management of the portfolio in the years to come.”

While he acknowledges that Harvard’s new risk tolerance level “might well be different from that of other university endowments,” it is reasonable to ask what the effect might be if Harvard does open itself up to less liquidity and more risk in the future.

But then again, as the biggest player in the space, maybe Harvard feels it has a lot more at stake than dollars and cents. And that could be enough for Harvard to continue to seek small adjustments to its risk profile while giving a wide berth to the ghosts of FY2009.

Even though we’ve been doing this for six years we still find it to be pretty incredible that by just looking at annual reported numbers one could find clues of how the game is being played – rather than simply registering last minute scores. And we look forward to comparing Harvard to other schools on the same risk-return level playing field once all FY2021 scores come in.

DISCLAIMER: MPI conducts performance-based analyses and, beyond any public information, does not claim to know or insinuate what the actual strategy, positions or holdings of the funds discussed are, nor are we commenting on the quality or merits of the strategies. This analysis is purely returns-based and does not reflect actual holdings. Deviations between our analysis and the actual holdings and/or management decisions made by funds are expected and inherent in any quantitative analysis. MPI makes no warranties or guarantees as to the accuracy of this statistical analysis, nor does it take any responsibility for investment decisions made by any parties based on this analysis.