How Brown Outperformed for the Second Year in a Row

For the second straight year, Brown outperformed all other Ivy endowments by a large margin. Our research team, using MPI Stylus Pro to dissect the endowment annual returns, provides a plausible explanation of the endowment's spectacular results.

For the second straight year, the Bears outperformed all other Ivy endowment teams by a large margin, producing 12.1% return in 2020 Fiscal Year (FY20) ending June 30th, – bringing the endowment’s value to $4.7B, an all-time high. Dartmouth was a distant second with 7.6%. What’s truly remarkable is that out of the 8 Ivy League Schools, Brown was the only one to outperform a domestic 60-40 equity-bond index portfolio for two years straight.1 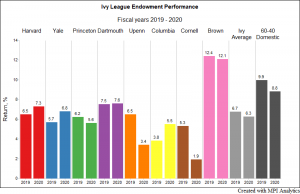 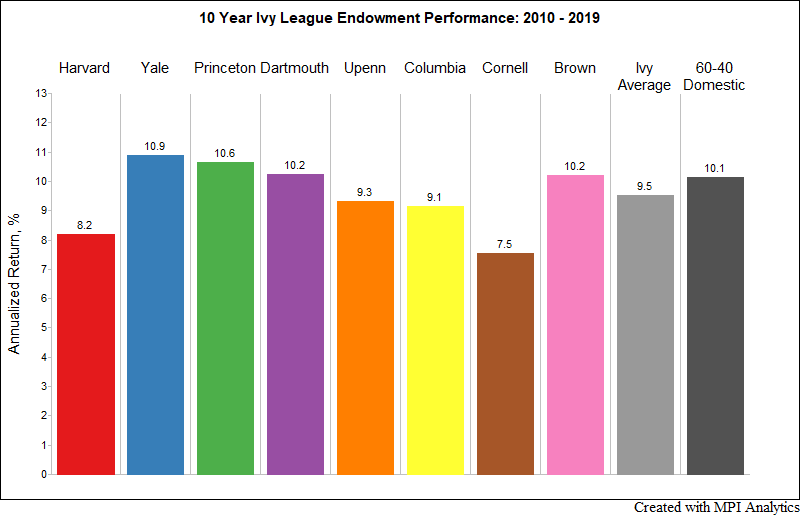 Consultants and industry experts are crediting Brown’s performance to its significant allocation to private investments, however, that doesn’t fully explain why Brown was heads and shoulders above the rest of the Ivies with similar allocations to private assets. For example, according to their  FY20 financial statements, Brown’s combined allocation to private equity and venture capital was 31.2%, while Yale – the “alma mater” of the “endowment model” – had 41% target allocation to private investments while producing returns for the past two years that were less than half of Brown’s.2 Essentially, asset allocations in both endowments were quite similar, with a strong emphasis on equity (as shown in the table below), yet they produced quite different results.

A recent WSJ article credits the management team, led by CIO Jane Dietze (a role previously held by Joseph Dowling), for making the bold decision to hire talented hedge fund managers, and provides several anecdotal examples of hedge funds with consistent annual returns of 30%-50%. In the press release, Ms. Dietze attributes the portfolio’s performance results to an “outstanding group of external investment managers who collectively have exercised measured judgment in the face of historic volatility in the financial markets.”

While such an explanation is flattering for both the investment team and fund managers, it doesn’t equate to much for performance and risk professionals who are used to hard numbers of performance attribution, factor beta, marginal and component risk, etc. The question to now ask is:  Is there a way to objectively measure such a “collective measured judgement” of a diverse group of talented hedge fund managers given that annual returns is the only public endowment data available?

For the past 5 years, MPI’s research team has embarked on a challenging task to find clues to endowment performance hidden in their annual returns. To do so,  we used a returns-based technique developed by Nobel Prize winner Prof. William F. Sharpe in the early 90’s. Over time, we extended this technique to complex arbitrage strategies such as hedge funds, total return and unconstrained fixed income, and it is now used by both investors and even regulators, to understand opaque and secretive investment products. A major advantage of this patented technique – Dynamic Style Analysis or DSA – is that it works incredibly well with short time series, such as sparse annual data.

In our FY19  endowment report, we used a set of generic private and public benchmark indices to decipher a wide dispersion of results between the Ivies. We consistently found that large endowments, like most large diversified investment pools (such as pension funds), are a perfect illustration of the power of diversification, with asset allocation explaining the dominant share of their results. However, some portion of their return (“model error” which we call “manager selection” or simply “selection”) remains unexplained. Based on our analysis, last fiscal year Brown’s selection return – the portion unexplained by the broad generic asset class benchmarks – was significant and notable as the only positive value among Ivies.   We applied the same set of asset class benchmarks for FY20, and we again saw a significant selection return. Typically, our analysts don’t like to see a large portion of return unexplained by the model. It could mean many interesting things for an obscure hedge fund, but for a diversified $5B investment pool it’s an indication of the model missing an important factor(s).

In our search for missing factors, we first turned to annual endowment reports and audited financial statements. We summarize Brown’s 10 years of asset allocation in the chart below. 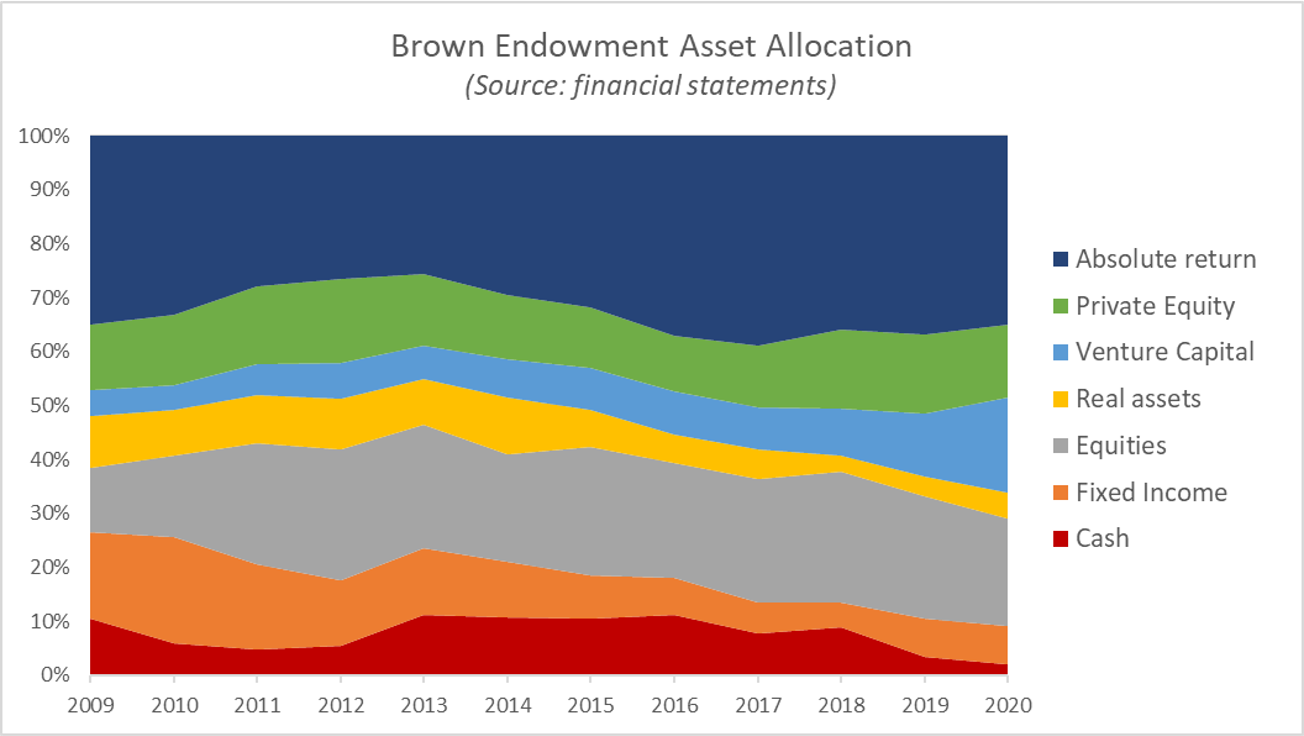 We find additional clues in the previously mentioned WSJ article, which mentions Atreides Management LP, Melvin Capital Management, and Skye Global Management as examples of spectacular investments by the Brown team. When looking at the fund descriptions and 13F filings for the investment companies, a common theme emerges – Technology. For example, Atreides’ website states “Atreides Management, LP brings the long-term perspective of a private equity investor to high growth technology and consumer companies and invests across public and private markets.” Skye is a long-short hedge fund with top five long positions as of 2QTR 2020 include MSFT, FB, AMZN, GOOG. Melvin Capital “invests primarily in tech and consumer stocks” according to the Wikipedia article.

The technology sector has had a phenomenal run for the past two years. In FY20 specifically, the S&P 500 Information Technology Index return was up 35.9% – much higher than Cambridge Associates’ Private Equity (9%) and Venture Capital (11.8%).3 It is quite plausible to assume that technology is the missing factor that could explain the performance of Brown’s stable of long-short hedge fund managers when all “longs” cancel out with all “shorts.” 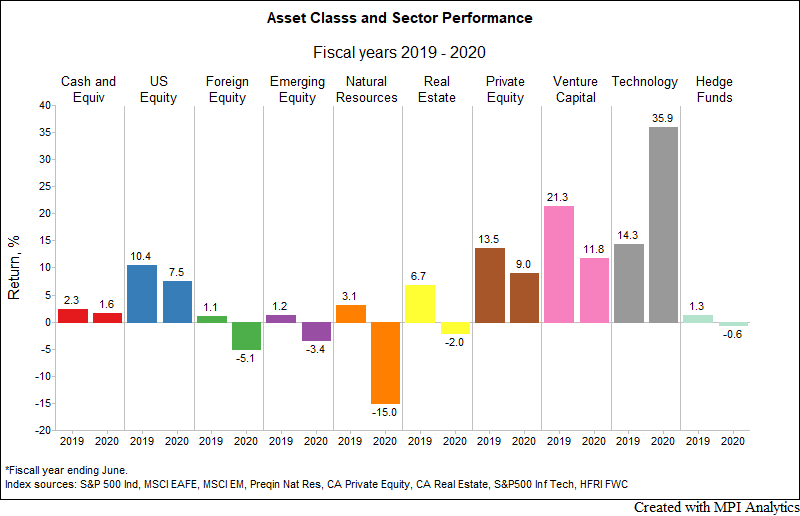 Using MPI Stylus Pro’s Dynamic Style Analysis, we aim to create a portfolio of generic asset class benchmarks (plus Technology sector index) that predictively mimics the annual return of the Brown endowment portfolio. Our model is versatile and allows us to incorporate an additional bit of valuable information gleaned from the WSJ article – specifically that Brown doesn’t rebalance their portfolio as frequently as other endowments. This allows for their best-performing segments to grow and less performing to dwindle over time – a momentum approach vs. a more disciplined approach of a pension fund that has stricter investment guidelines and horizons.

Below, we show the results of the analysis. Each color band represents historical estimated weights in the mimicking portfolio of asset class indices.  Comparing our quantitative analysis of annual returns and published allocation numbers taken from financial statements, it is easy to spot the similarity of the trends captured by rapidly increasing VC allocation and dwindling exposure to Real Assets. At the same time, our analysis overestimated private equity allocation while underestimating public equities with the combined allocation is about the same. 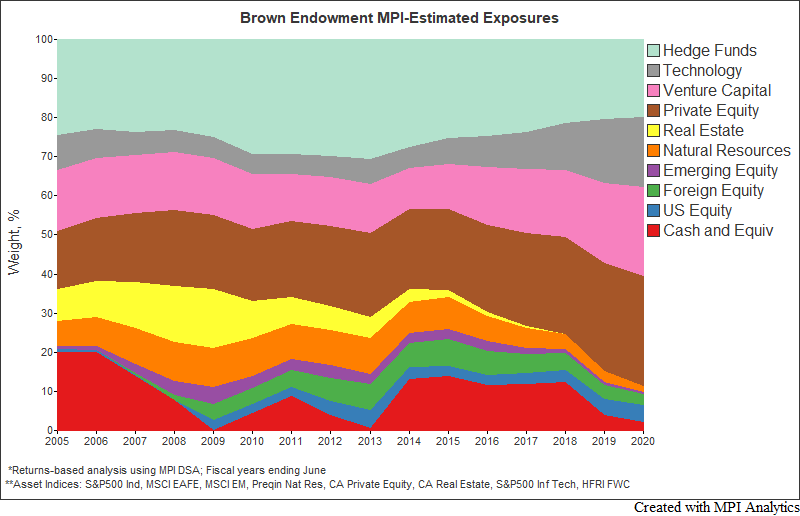 It is easy to see that the combined exposure to Hedge Funds and Technology is very similar to the Absolute Return allocation in financial statements. According to our analysis, estimated exposure4 to technology almost doubled over the past three years, which could be, in part, driven by specific investments mentioned in the WSJ, which grew organically while dominating other segment returns.

The chart below shows the total cumulative performance of the Brown endowment and the mimicking “tracker” portfolio of asset class benchmarks determined by DSA. A relatively stable portfolio of asset indices replicates endowment returns very closely (albeit in-sample) leaving very little unexplained – a significant improvement over the generic model that we used in previous years.

Analyzing each asset class’s contribution to the total return of the tracker portfolio could help understand why Brown outperformed. The Performance Attribution chart below shows estimated total return contributions given asset class exposures determined by DSA. Over the past two years, Private Equity, Venture Capital, and Technology dominated the endowment’s return with selection being negligible. And while 2019 was “the year of Private Assets” for Brown, this FY20 was clearly “the year of Tech.” Whether known or unbeknownst to the investment team, they seem to have accumulated a significant overexposure to tech stocks which, regardless of the skills of their managers, could be valuable information for their risk team. 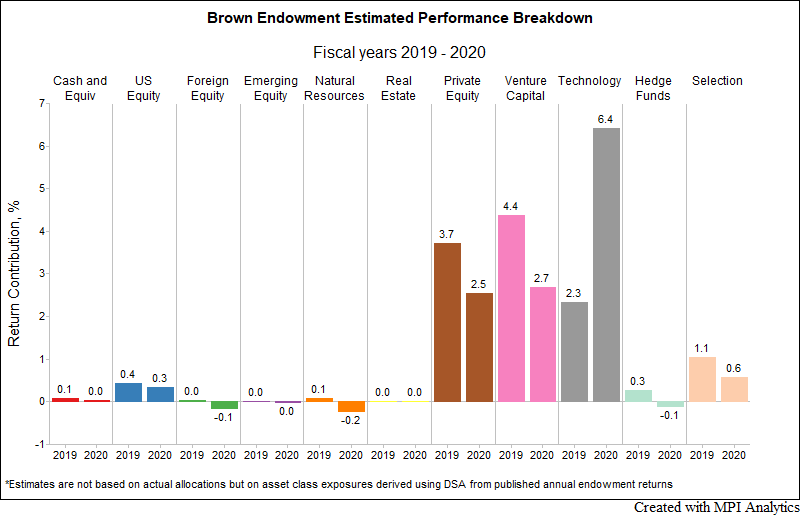 We conclude with the following important takeaways: