Is 2022 All Bad Weather For Risk Parity?

Risk parity strategies can look very different from each other in implementation.  They may have different risk budgets, risk targets, asset class buckets or even different definitions of risk. In this particular period, however, the disparity in performance is staggering.

Risk parity strategies are based on the premise of diversification through risk budgeting across asset classes to withstand diverse economic environments.   That goal is being challenged yet again in an inflationary environment unseen in over 40 years, combined with growth uncertainty and valuation skepticism weighing on prices further.

Stocks and bonds, the primary ingredients of all balanced portfolios, are both down for the year, -16% for the S&P 500 as of the end of August, and -12% for the ICE BofA Current 10-Year Treasury Index.  Global indices are similar or worse.

How then, has risk parity fared as a strategy in this environment? It depends.  Below we see the performance of some of the largest risk parity funds, including Bridgewater’s All Weather 10% target volatility portfolio over the first eight months of this year.  None have posted positive returns, but three have lost less than a 60/40[1] portfolio, while three have lost considerably more. 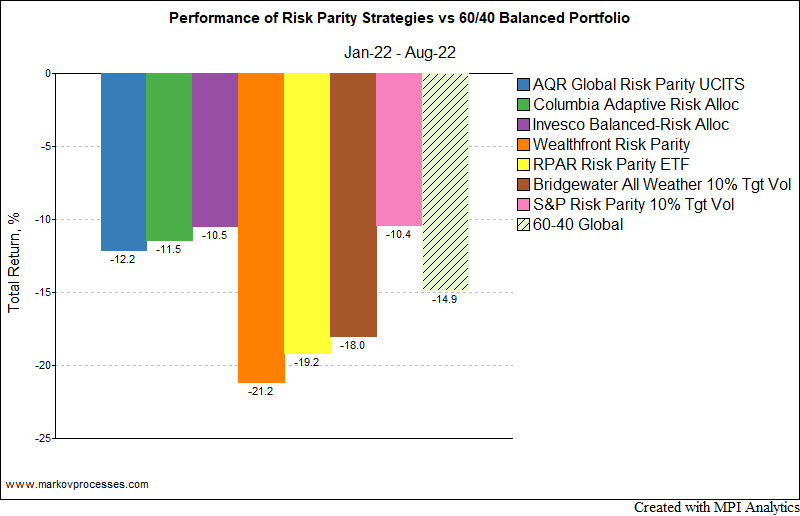 As we’ve reported before,  risk parity strategies can look very different from each other in implementation.  They may have different risk budgets, risk targets (and, therefore, degree of leverage), asset class buckets or even different definitions of risk. In this particular period, however, the disparity in performance between the top performing funds and the rest of the group is the story, more so than the usual focus on performance vs. the benchmark.

The differences become quite apparent using MPI’s Dynamic Style Analysis (“DSA”) to quantitatively assess the factor exposures that appear to be driving fund behavior. Of particular note is the level of exposure to assets intended to protect in  inflationary environments, such as TIPS and commodities.  Bridgewater’s Ray Dalio has long cautioned  about rising inflation and our analysis indicates that, out of the risk parity funds that we analyzed, theirs had the highest exposure estimate to assets intended to hedge inflation.  Some funds appear to have almost no inflation protection exposure at all.  Similarly, implied leverage (negative Cash exposure) ranges from zero to over 100%. 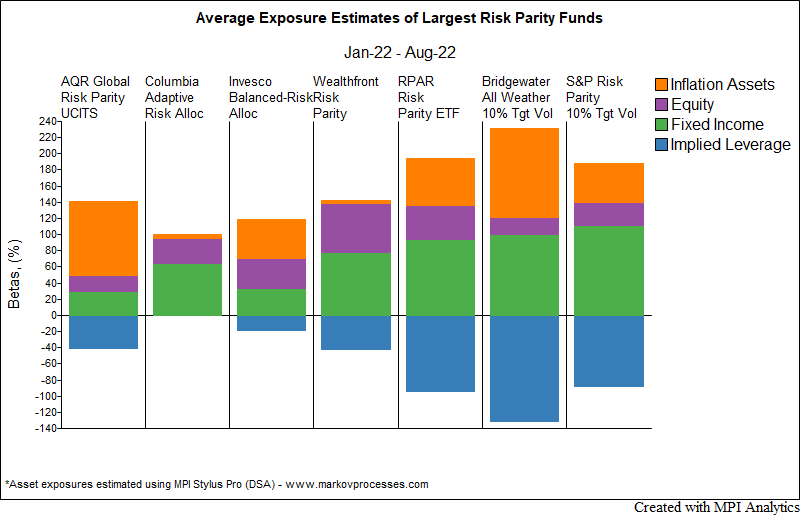 In the first eight months of the year, only one asset class has performed well – commodities.   TIPS, which are intended to protect against inflation, are nonetheless adversely affected by rising rates, as are all treasuries. 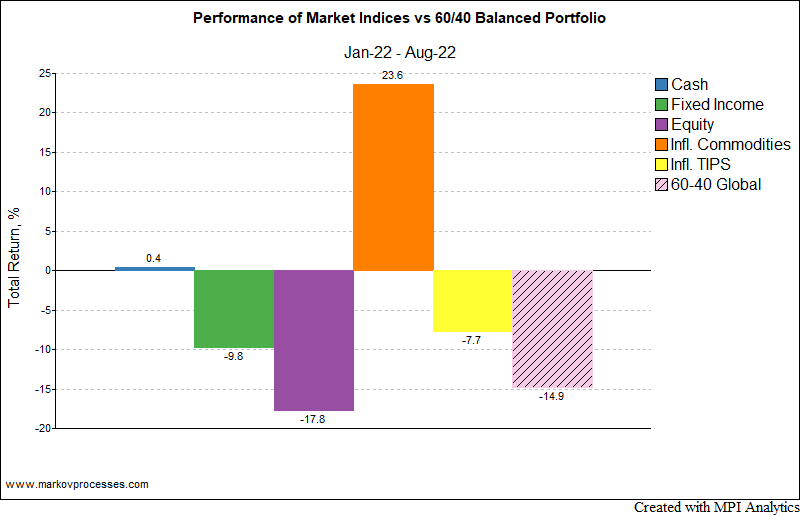 When computing 2022 quantitative performance attribution for the chart below, we separate Commodities from TIPS (the two component factors of the Inflationary assets)[2]. On an absolute basis, the funds that performed better either had high commodity exposure relative to the remainder of the portfolio (Invesco, AQR and the S&P Risk Parity benchmark), limited leverage (AQR, Columbia, Invesco) or both. 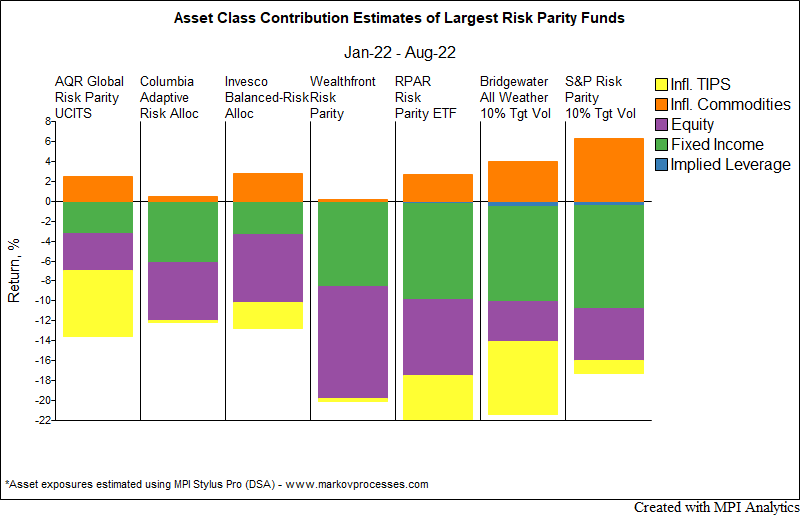 The low impact of implied leverage may come as a surprise. We should note that even though we assumed minimal cost of borrowing (at the level of 3 month TBills), increasing it by a couple of points won’t change things significantly. However, the real impact of leverage is borrowing to “invest” in poorly performing assets such as bonds and stocks over the year to date.

To support this point the chart below details components of excess performance of each portfolio vs. the Global 60/40 benchmark. Each contribution is computed as the product of excess asset exposure weight over the benchmark times excess asset return over the benchmark. This chart provides a “lens” allowing one to evaluate each apparent under/over-exposure to a given asset in relation to the passive 60/40 benchmark. 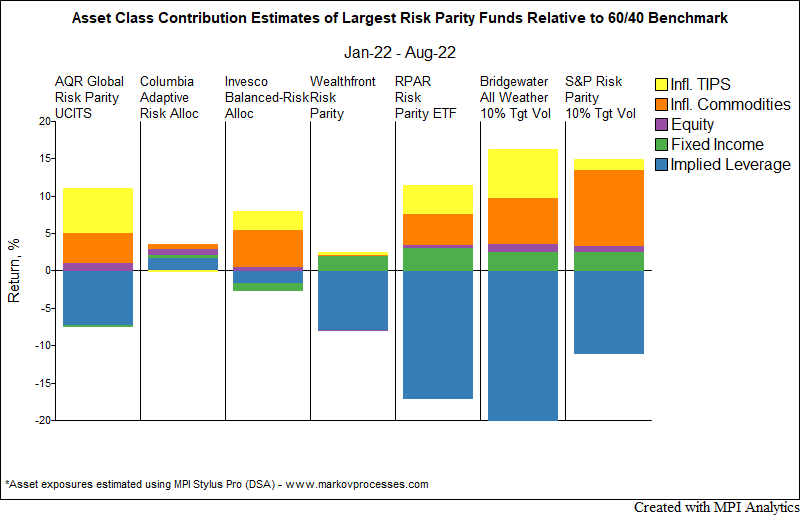 Which leads us to a concluding take-away: while commodity exposure appears to have been the primary way to have mitigated losses during the recent period, every risk parity fund that we evaluated (and the risk parity benchmark) that had any kind of exposure to defensive inflationary assets benefitted significantly compared to the traditional 60/40 benchmark.  Beyond that, the under or outperformance of a given fund was primarily due to the extent of implied leverage in our analysis. In this regard, Invesco’s Balanced-Risk Allocation fund with its apparently limited leverage and significant commodities exposure,  seems to be the winner so far this year.

[2] Invesco and the S&P index show small estimated exposure to TIPS where there’s none according to the fund documents and the index methodology respectively. This is due to the fact that TIPS are correlated with fixed income and the factor model may have hard time distinguishing the two when monthly data is used. When we perform analysis using weekly or daily data the TIPS exposure is much closer to the reported allocations. The primary reason for using monthly data is due to Bridgewater’s All Weather returns are available only monthly.

Investment Risk Analytics MPI analytics provide a more effective and impactful way to identify, analyze and present the risk characteristics of individual investment products and portfolios.
MPI Stylus A powerful investment research and reporting engine that drives much of the analytical capability that MPI technology solutions deliver.
All solutions