A Win is a Win for the Yale Endowment

Yale's been cutting private equity and real estate for years to stay liquid. Did they cut too much, or did they find the right balance for FY2022?

When UPenn posted its 0% FY2022 return last week as the first Ivy to report, it perfectly set up two themes for the year. First, it was a very, very good year to be in real assets. Second, CIOs continue to move towards private equity to find returns they can no longer get from hedge funds and public equities.

In UPenn’s case, our quantitative estimates (inferred from annual endowment returns) showed a 2.67% return on private equity, with boosts from natural resources and real estate. Together, these overcame drawdowns from hedge funds (-2.84%) and US equity (-1.95%) to land the endowment at a perfect zero return for the year.

And now Yale reports a similar story, but with a slightly happier ending. The $41.4B Yale endowment posted a 0.8% return for FY2022, driven by strong real asset performance and its exposures to private equity.

We forecasted Yale’s returns in August based on what we estimated their allocations were last year. While they probably would have preferred to hit our number of 2.38%, their allocation changes still left them with a good result when compared with endowments like Cornell (-1.3%), Duke (-1.5%), and Dartmouth (-3.1%).

A year is just a year; endowments focus on the long-term. As Yale endowment CIO Matt Mendelsohn said in his reporting statement, “in such a volatile year for the world’s financial markets, we are pleased to have protected Yale’s capital.”

In other words, a few percent better would have been great, but at least they didn’t lose anything.

Incidentally, Yale might have done even better with a stronger concentration in real estate, but Mr. Mendelsohn’s predecessor (the late David Swensen) began cutting real estate exposures in 2015 to address liquidity concerns. And more recently, the university wrote in September 2020 that it “seeks to limit illiquid assets (venture capital, leveraged buyouts, real estate, and natural resources) to 50% of the portfolio.” It will be interesting to watch how this bears out in the years ahead, or if Yale adjusts these targets in light of recent performance.

We use our proprietary Dynamic Style Analysis (DSA) and MPI Stylus Pro system to quantitatively peek behind the curtain of endowment investments, giving views that are often impossible to obtain otherwise.

In this case, we dissected Yale’s annual returns, with the chart below featuring asset class exposures obtained using our model. You can view this as a proxy of the endowment’s asset allocation after all the various individual manager contributions are netted out against one another in the $41.4B endowment portfolio. 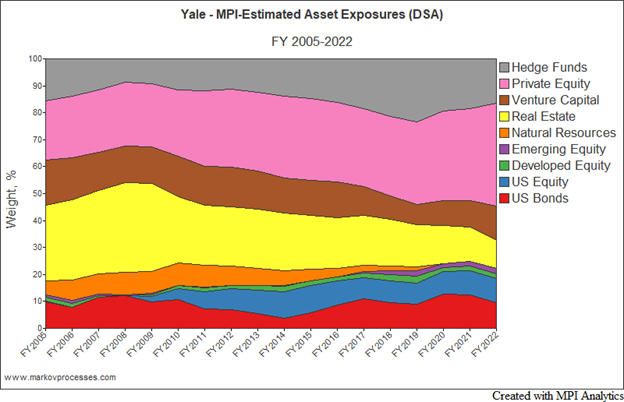 You can see the move away from real estate over the past few years, entirely in line with Yale’s annual public disclosures. Also visible are hedge funds dwindling at the expense of private equity and venture capital. The latter could be simply the result of the growth of the private sleeve, which posted much higher FY 2021 returns than hedge funds.

This is a similar pattern to the one shown in our UPenn piece, and we expect it to play out in many other endowments as returns become available. But obviously, the specific annual results will come down to the allocation weights the endowment was carrying. As we mentioned in August, for this fiscal year in particular, a slight over- or under-weight of an asset class can make the difference between a positive or negative overall return. Consider the chart below, depicting Yale’s MPI Stylus-estimated contributions from asset class exposures. 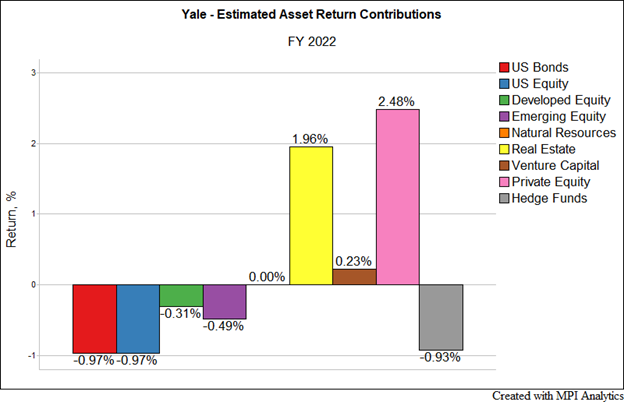 To put these numbers in perspective, let’s compare them with how UPenn fared in the same categories.

As you can see, Yale captured most of the same private equity and real assets upside, while simultaneously avoiding a significant percentage of UPenn’s losses in the hedge funds and US equity categories. At the end of the day, it was enough to push them over the goal line and give them positive returns for the year.

Of course, their student newspaper reports that the true returns may be lower based on the actual pricing of illiquid assets. But that’s always the case for these types of assets. As NYU Stern professor David Yermack notes in the same article: “It’s hard to know for sure what these investments are worth at any point in time, and any endowment that invests heavily in illiquid assets is really just producing estimates of the portfolio’s fair market value each year.”

Precisely. And another reminder that investors need all the information they can get when trying to understand the true drivers of performance and risk in endowments, pensions, and other opaque investments. We said in August that Yale’s performance could “give a glimpse of what individual endowment performance might look like if it’s overweight in private equity and real estate.” The results speak for themselves, and Yale can put itself in the win column for another year because of it.