Fiscal year 2019 was a curious year for the Ivy League endowments. In a year with strong returns in key private market investment classes, the average Ivy underperformed a traditional domestic balanced 60-40 portfolio in FY 2019. Ivies also experienced a wider dispersion of returns and saw a shift in the historical positioning of performance leaders and laggards.

Fiscal year 2019 was a curious year for the Ivy League endowments. In a year with strong returns in key private market investment classes, the average Ivy underperformed a traditional domestic balanced 60-40 portfolio1 in FY 2019. Ivies also experienced a wider dispersion of returns and saw a shift in the historical positioning of performance leaders and laggards.

In this review, we decode what may have happened in FY 2019 and suggest private market investments typical of larger endowments as the likely root of the year’s anomalous results.

A Surprising Year of Underperformance

As we wrote in our recent 2019 review, the average Ivy return for FY 2019 was 6.7%, significantly underperforming a reference 60-40 domestic portfolio.  All the Ivies but Brown fell short of this measure of a balanced portfolio.

Returns of the Ivies have lagged the domestic 60-40 portfolio before, most notably in 2016 and 2012 as the 10-year table above shows. In those years, private investment asset classes favored by large endowments underperformed or performed similarly to public assets, explaining most of the shortfall.  That was not the case in FY 2019. Last year, Private Equity (13.8%) and Venture Capital (21%) posted returns2 well above both Bonds (7.9%) and Public Equities (10.4%).

Also, in 2019, the spread in returns across the Ivies was wider than has been typical in most years, with outliers Brown at the high end at 12.4% and Columbia trailing the pack at a disappointing 3.8%. Historical positioning shifted as well. Looking again at the relative performance among Ivies over the last 10 calendar years, Yale, Princeton and Dartmouth tended to be in the top half, while Harvard and Cornell, both of which are in the midst of multi-year restructuring, tended to be near the bottom.  Those tendencies shifted in 2019 as Princeton and Yale give ground to Harvard and Brown.

What happened in 2019 to explain the general underperformance of the Ivies in a period that was favorable for the private market assets the “Yale model” of investing allocates heavily towards, along with the heightened dispersion in returns across these elite endowments and the shift in competitive positioning?

As we do annually, we analyze each Ivy endowment’s annual return time series against a common factor set3 seeking to understand the dynamic asset class exposures that best explain the portfolios’ returns.  From this, we create a factor-mimicking portfolio for each endowment in order to gain additional insight into the drivers of the endowments’ performance.  The analysis is performed using DSA,4 our proprietary returns-based analysis model that can help lend transparency to opaque or complex strategies.  Endowments can be both, and, in addition, report performance only once a year, providing very limited data points.  The chart below displays our estimates of the endowments’ strategy exposures since 2005.

We see that – consistent with our previous analyses – Yale and Princeton appear to have the highest exposure estimates to Private Equity and Venture Capital strategies, while Harvard, UPenn and Columbia have some of the highest exposures5 to Absolute Return strategies, or Hedge Funds.  According to both our analysis and annual reports, all Ivies have over half of their portfolios invested in a combination of Real Assets, Private Equity (including VC) and Hedge Funds, with most positioned at more than two thirds.

In the chart below, we illustrate the primary drivers of the endowments’ FY 2019 performance based on their exposure estimates,6 and the FY 2019 asset class, or strategy, returns.  Each color band represents contribution of the respective asset class to that fiscal year’s return. As in prior years, we estimate that the largest contributors to most endowments’ returns are Private Equity and Venture Capital, which is as much a function of the outsized returns of these two strategies as the Ivies’ high exposures to them.

And herein lies the puzzle.  Yale and Princeton were both in the bottom half of FY 2019 Ivy performance tables, despite having the highest exposures to the year’s top-performing asset classes Private Equity and Venture Capital rather than laggards, like Foreign Equity and Hedge Funds.  Conversely, Brown reported one of the highest allocations to Hedge Funds and boasts a 2019 return double that of its cohorts. 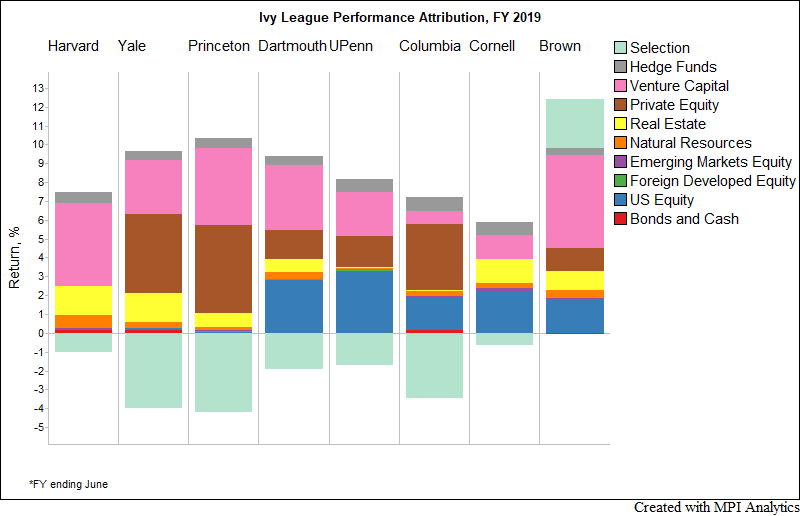 Looking at the above chart, the notable takeaway is the full complement and magnitude of negative selection returns, with the exception of Brown. Selection, or “unexplained” returns may be due to individual manager security selection skill (or lack thereof), asset classes not represented in our factor map of common exposures (e.g., emerging market bonds, small-cap stocks or PE vintages), intra-year tactical asset allocation shifts not captured by our model—which is based on annual data points, and also potential differences in valuations (for private and illiquid investments).  Finally, there are additional specific costs borne by endowments that are not captured by the index factors, including a portion of fees, potential write-offs or write-downs and any restructuring that occurred intra-fiscal year.

It’s worth noting that the mean or a longer-term component of selection returns is usually referred to as alpha. And while selection returns (technically the model error) fluctuate around the mean, the significance of the mean value is very important in making any longer-term conclusions and projections, a topic we explored in our 2017 academic paper “Alpha and Performance Efficiency of Ivy League Endowments: Evidence from Dynamic Exposures”.

The Impact of Investment Choices

We posit that selection explains the year’s underperformance for the majority of Ivies. Leading the class, Brown reported a FY 2019 return of 18.2% for its aggregate Private Equity (Buyout and Venture Capital) holdings, compared to Harvard’s 16.0% .  Brown also noted that its absolute return strategies beat the S&P 500’s 10.4% – compared to 2% for our Hedge Fund index,8 or Harvard’s 5.5% absolute return portfolio performance.  Such individual variations aren’t captured by our aggregate estimate, which covers the net effect of decisions across strategies.  They do, however, help demonstrate the impact specific investments within a strategy, or asset class, can make.  This is particularly evident in the case of private assets.

Note that endowments with the highest exposure to PE and VC (Yale, Princeton, Columbia and Brown) have the highest selection this fiscal year (in absolute value – positive or negative), while the endowments with the focus on more traditional asset class exposures have lower selection return, Harvard and Cornell in particular. Intuitively, it makes sense since private asset benchmarks represent averages (potentially skewed by AUM) which may not represent individual investments as well as public asset benchmarks do.

The relative challenge and importance of selecting specific investments in key alternative asset classes is exemplified in the charts below.  These charts show the distribution of fiscal year returns9 over the past 5 years for a universe of Preqin Private Equity Growth and Buyout funds as compared to a universe of U.S. Mid-Cap mutual funds.  They represent the investment opportunity set of both actively managed universes.  A Private Equity Fund of Funds universe has been added underneath for reference as it can be considered a better proxy of a diversified institutional investment in private equity. 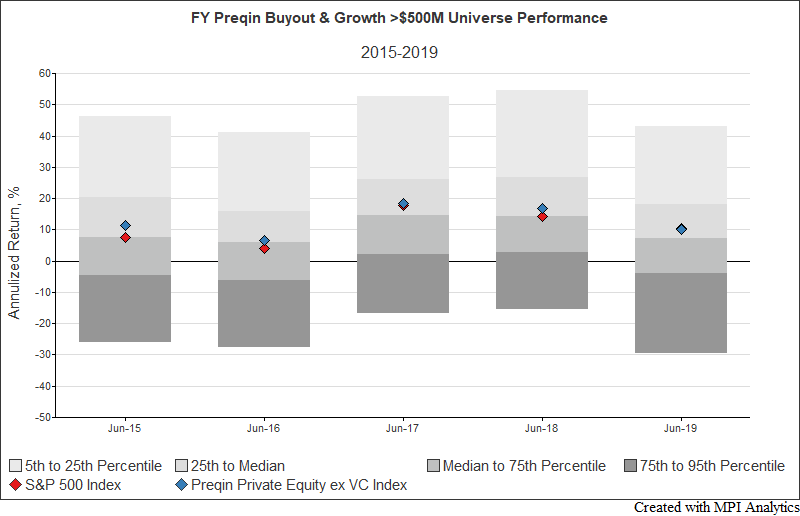 The difference in range of possible results between Private Equity funds and Mid-Cap equity mutual funds, which are fundamentally investments in the same asset class, is staggering.  FY 2019’s Private Equity returns range between 43% and -29%10 – a 72% spread between the top 5% and the bottom 5% of funds!11 – while the same range for Mid-Cap mutual funds is between 17% and -7% (a spread of 24% between the top 5% and the bottom 5%).  For Private Equity Fund of Funds (PE FoF), the range is still very high, 31% to -27%, with a spread of 58%. The PE FoF spread is the widest in recent history, potentially explaining the uncharacteristically wide spread of the year’s endowment returns.

The extremely wide dispersion of private equity returns is mentioned by Yale CIO David Swensen, creator of the “Yale Model”, in his book Pioneering Portfolio Management (2000), which listed the 10-year inter-quartile range of Leveraged Buyouts (13%) to be more than five times the range for US Equity managers (2.5%). However, observing fluctuations of such spreads short-term allows one to understand the investment selection pain experienced by private markets investors “in real time.”

The low variability in average returns yet wide distribution in private equities make it very clear that the ability to select managers and funds needed to produce valuable payouts years into the future is critical to successfully managing a private equity portfolio, or in fact most private asset portfolios.12  The distribution also makes it very difficult to underestimate the risk in private equity as may be done from index (average) returns.  In most years, the bottom quartile sits fully in the negative territory, often in double digits, even though the index may register a positive return in the double digits.

Indeed, the difference between private and public equity index returns could be argued to be negligible in comparison to the significantly greater range of outcomes in private markets.

Our best theory on 2019 is that the generally poor performance of the Ivies overall versus traditional balanced portfolios, and the relatively high dispersion in returns across the Ivies are the result of individual choices by these endowments from among the investment opportunity set and, in turn, by the investment decisions of their underlying managers, particularly in private market assets.  What the Ivy league endowment experience in FY 2019 may highlight for investors is an additional word of caution about private equity investing and return expectations in the vast private company opportunity set: even the top institutional investors with access to the most in demand managers in a period of solid average (index) returns can end up getting hurt by having such large exposure to the wide range of outcomes in private equities.

Forward-looking return estimates for all asset classes are lower than those of our recent past.  Looking ahead, as private equity funds sit on a current record amount of dry powder, and valuations remain uncomfortably high, the ability to meet investors’ appetites and expectations for high returns can be expected to become scarcer, and more will depend on endowment managers’ ability to identify and access the best managers in the strategies with the greatest opportunity.  As observers, we will continue to mind the performance gap.