How Much Risk are Ivy League Endowments Taking?

Lessons (not) learned: our analysis shows Ivies are at pre-GFC levels of risk

The high prices for fixed-income assets mean bonds, typically a ballast in portfolios, are unlikely to offer much protection should stocks quake again. Meanwhile, equity markets now trade at elevated valuations in many countries, limiting their scope for further gains. “Falling interest rates were the engine of a twin bull market. You couldn’t lose for 40 years. But that game is over now, so what do you do?” said Stan Miranda, chair of Partners Capital, which manages $40bn on behalf of endowments, family offices and charities.

In light of lower expected future returns due to low bond yields and high equity valuation multiples, institutional investors may look to alternative assets to boost returns. But large endowments already have over half of their capital invested in alternatives.

…what was once pioneering is now commonplace. The average US foundation now has over half its money in alternative and “real assets” like property and infrastructure, according to the National Association of College and University Business Officers. Two decades ago it was under 10 percent.

As can be seen below, Mohamed El-Erian has an explanation for this broad-scale movement into alternative assets – one that implies that these investors are taking on more risk that is not readily apparent for privately owned assets.

Most investors are increasing allocations to alternatives to counter the dimming outlook for mainstream markets, notes Mohamed El-Erian, a former head of Harvard’s endowment. “The reasons these vehicles have gotten so popular is that they allow you to use leverage without showing that you’ve used leverage, because it is within the vehicle itself,” he says.

El-Erian’s comments apply directly to Ivy league endowments; most follow the “Yale Model”, which is characterized by a small allocation to debt and high allocation to private and other alternative assets. If alternative assets potentially conceal the true risk they are taking, a pertinent question is, “how to estimate the risk Ivy endowments are taking by using only publicly disclosed annual performance results?”

To answer this question, we build on our experience analyzing Ivy League endowments as we did in 2015, 2016, 2017, 2018 and 2019 to quantify their respective exposure to public risk factors. We will use this risk assessment to estimate the historical volatility these portfolios would have experienced (if public), and the losses each endowment would have thus realized during both the Internet Bubble Meltdown and the GFC. Our intention? To quantify the true risk each endowment is taking – and assess if their associated university has a risk tolerance to withstand these losses in similarly stressed situations.

To perform this analysis, we used a returns-based technique developed by Nobel Prize winner William F. Sharpe in the early 1990s. Over time, we extended this technique to complex arbitrage strategies such as hedge funds, total return and unconstrained fixed income, and it is now used by investors and regulators alike to understand opaque and secretive investment products. A major advantage of our patented technique, Dynamic Style Analysis (DSA), is that it works incredibly well with short time series, such as the sparse annual data provide by Ivy endowments.

In MPI’s previous research into Ivy endowments, we identified the changing factor exposures of Ivies over time and included private return indices as factors. The challenge with private indices is that, because they are private, they exhibit both lagged reporting and return smoothing. These combined effects serve to decrease the measured volatility of the indices in comparison with what they would be if public, and the correlation with other asset classes. Both of these effects reduce the measured portfolio volatility below the portfolio’s true risk. We addressed this issue by de-smoothing private asset indices, but it’s a mechanical process highly sensitive to model assumptions. Additionally, private asset indices report quarterly, and one needs at least monthly data for precise risk analysis and stress tests.

In an attempt to address these concerns of understated portfolio risk, the endowment portfolios were analyzed using public market indices. Because all of the indices are public, their measured volatility will provide a reasonable proxy for true risk and the correlation statistic will not be downwardly skewed due to reporting lag. We have found that by using endowments’ annual data (June-July fiscal years), as opposed to more frequent data, many of the problems associated with more frequently reported data for private assets tends to be mitigated. One exception is private real estate, which we have found to lag public real estate reporting by approximately one year. This issue was addressed by lagging the public real estate factor by 1 year.

Our focus this time is on the latest public asset exposures of endowments as, understandably, endowments underwent significant changes since the GFC – both market-driven and imposed-restructuring. These exposures will be utilized to estimate the historical volatility of exposure-weighted portfolios and the drawdowns current Ivy portfolios would have sustained had their assets been public during the Internet Bubble Meltdown and the GFC. While it is acknowledged that each recession and market correction is unique, the goal of the comparison is not to focus on the precise drawdowns, but more so to identify the general magnitude of the drawdowns that would have been experienced during the past two recessions prior to the Covid recession. The intent is to provide scenarios so institutions can question if they have the risk tolerance to sustain such losses and continue in their respective missions.

Shown below are the dynamic exposures for each of the Ivy endowments since 2007 derived through DSA analysis of annual endowment returns. Notably, each endowment portfolio exhibits dramatic increases in bond and cash exposures during the GFC which could be attributed to the drawdown in equities. Subsequent to their peak post GFC, the bond and cash exposures have steadily decreased for all Ivy endowments and returned universally to pre-GFC levels. Another notable observation is that commodities exposure also universally and steadily decreased.

We should note that results of returns-based analysis don’t always reflect a portfolio’s actual holdings. Specifically, endowments’ exposures to cash and bonds (shown above) could be quite different from what is disclosed in annual reports. This could be due to the fact that equity hedge funds typically have lower beta to the market, while private equity buyout has typically higher beta – and we model both with a combination of cash and bonds. We should also note that the quality of the above analysis is very high, with R-Squared’s of approximately 90% and negligible alpha.

To compare the relative risk Ivy endowments are currently taking, we use their 2020 asset class exposures and monthly index returns to calculate what the historical annual volatility of each would have been since 1999. This time period was chosen because it encompasses both the Internet Bubble recession and the GFC.

Also included in this chart is a break out of the risk of stocks by region. We see that EAFE stocks were 11% riskier than US stocks, but emerging market stocks were 44% riskier than US stocks. This illustrates that when considering risk, it is not only the stock-versus-bond mix that materially affects portfolio risk, but also the split between developed equity and emerging equity. 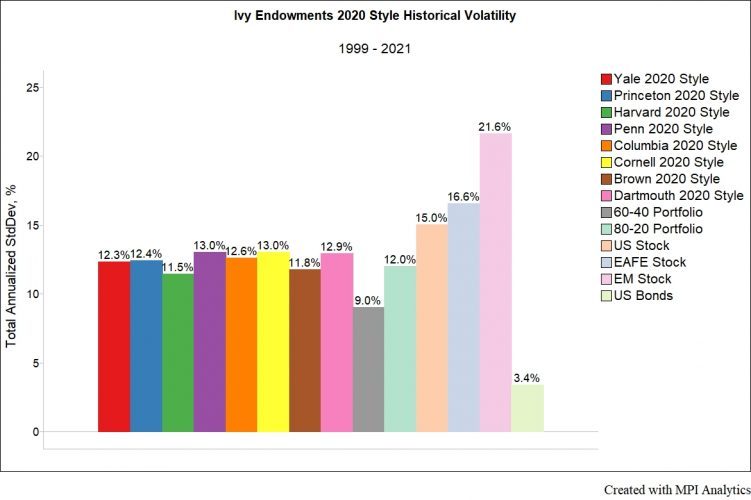 Using the 2020 Ivy style portfolios, we can estimate what the maximum drawdown of each endowment would have been during the Internet Bubble Meltdown and the GFC with their current portfolios (if they were public).  This analysis differs from their stated historical drawdowns in that their portfolio styles have changed over time; using public factors enables monthly granularity; and public factors do not exhibit return smoothing and lags as private assets do.

The chart indicates that with their current style portfolios (if their assets were public), the Internet Bubble Meltdown would have led to Ivy league endowment losses in the 26%-35% range and GFC losses in the 41%-45% range. These losses are far in excess of the losses that would have occurred to a 60-40 domestic stock and bond portfolio, which would have experienced losses of 20% and 32%, respectively. Estimated Ivy losses are similar to losses for the domestic 80-20 portfolio of 32% and 42%, respectively. 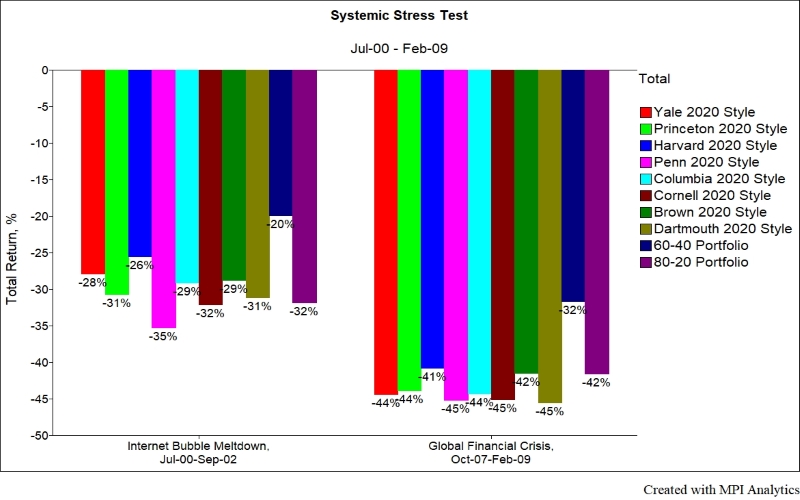 If we contrast these stress tests, we see that Penn’s current style would have generated the largest loss during the Internet Bubble Meltdown, but in line with the losses of the Cornell and Dartmouth endowments during the GFC. What is apparent is that Harvard’s endowment would have drawn down the least of any of the Ivy endowments during both stress events, suggesting that Harvard’s endowment is taking the least risk. What is also quite clear is that all Ivy endowments are taking materially more risk than a domestic 60-40 portfolio.

The chart illustrates just how much more damaging the GFC was on financial assets than the Internet Bubble Meltdown. Even though the NASDAQ experienced a peak-to-trough loss during the Internet Bubble Meltdown approaching 80%, other asset classes served to cushion the blow. This was not the case during the GFC as even a 60-40 portfolio would have experienced a loss of 32%.

Ivy League endowments are historically a challenge to analyze due to their large allocations to private and other alternative assets. Measuring nominal return is the easy part; the chart below depicts known returns, allowing us to say with certainty that the average Ivy league endowment underperformed a 60-40 portfolio by 60 bp and a 80-20 portfolio by 250 bp. The hard part? Measuring the risk taken to achieve these returns.

By employing the analytical tools available at MPI and making well-supported assumptions, we have been able to estimate that with the current portfolios today, the average Ivy endowment would be expected to draw down in the low 30% range if the Internet Bubble Meltdown happens again and in the mid 45% range if the GFC happens again if they invested in public assets. 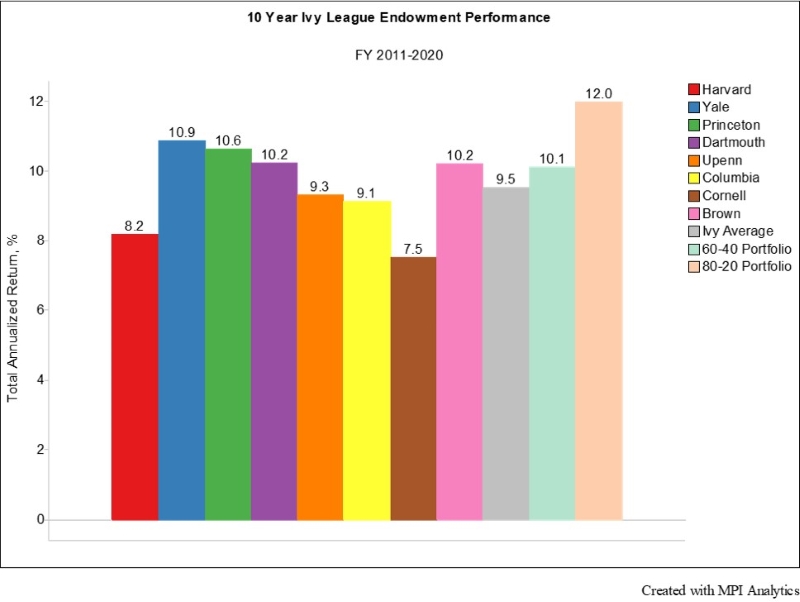 “Prediction,” goes an old Danish proverb, “is hazardous, especially about the future.”

The Shiller PE is currently around 37 and the US stock market capitalization to GDP ratio was 1.86 at the end of 2020. A back-of-the-envelope calculation would suggest that stock valuations in the US would have to drop by around 50% to get these ratios back in the neighborhood of the longer-term average.

Warren Buffett himself amassed a reported record $128B cash reserve by 2020 (just in time for the Covid recession to hit), no doubt informed by the highest US stock market capitalization-to-GDP ratio, or “Buffet indicator,” ever. Yet the dramatic stock market drawdowns experienced in the US in 1Q20 were largely recovered just one quarter later, and Buffet has resorted to buying his own stock back to the tune of $15.7B in the first 3 quarters of 2020.

So much for timing the market. Instead, Ivy endowments should closely examine how a loss would affect the operation of their respective university, and weigh these impacts against the potential upside return associated with increased risk. Endowments should assess the true risk in their portfolios of permanent loss and ensure that their portfolio risk fits within the risk tolerance of the institution.