It’s been a wild rollercoaster ride these days for Bitcoin investors. The cryptocurrency hit an all-time high of $64k in April only to plummet nearly 50% a month later. Last year, as the entire world shut down access to mountain peaks and surfing spots, people started to look for stay-at-home ways to supply their adrenaline fix – and speculative trading fit the bill.

It’s been a wild rollercoaster ride these days for Bitcoin investors. The cryptocurrency hits an all-time high of $64k in April only to plummet down nearly 50% a month later. Elon Musk says Tesla has bought $1.5B of Bitcoin and would start accepting it for payments, and then two months later changes his mind via Twitter. And just this past Saturday, El Salvador’s president proposes Bitcoin as legal tender which most likely will lead to another swing in price. When you add in the looming legal and regulatory battles, it may just be too much for the average investor to absorb in the middle of a global pandemic. But as it turns out, there are plenty of ways to be on the wrong side of volatility, and its not just average investors who get caught off guard.

Last year, as the entire world shut down access to mountain peaks and surfing spots, people started to look for  stay-at-home ways to supply their adrenaline fix – and speculative trading fit the bill. Is it any wonder that both Bitcoin (BTC) and GameStop (GME) charts resemble the shape of the COVID incremental US infections diagram from the CDC? 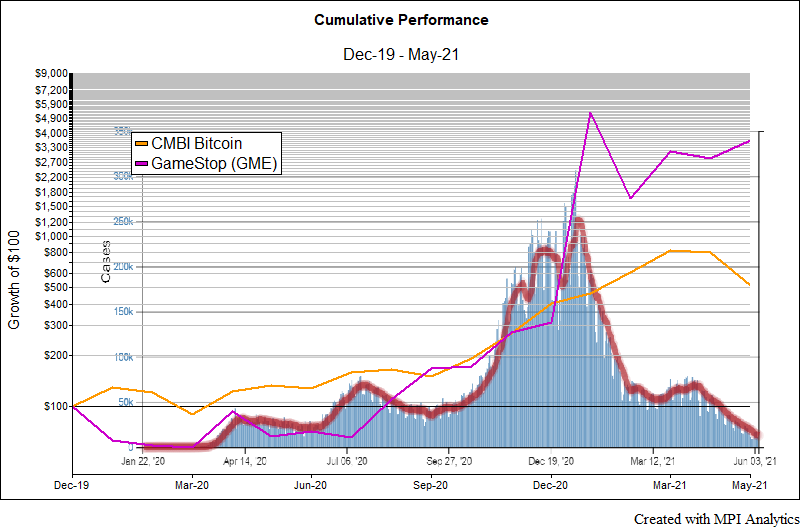 No surprises there…several years ago, we wrote that someone seeking to jazz up his/her life doesn’t need to climb Mount Everest or invest in Bitcoin. All they needed was a levered bet on an individual, already risky stock – trading options, for example. We showed that a 4.5 levered bet on Amazon would have created a distribution of outcomes that pretty much mimics Bitcoin’s. And all that free adrenaline would be backed by a diversified business, solid technology, AWS, warehouses, etc. without a similar threat from governments, regulators…or Twitter.

At the time we thought it was a clever observation…but we never advocated this as an investment strategy. We just wanted to show investors obsessed with Bitcoin an alternative, and frankly more sensible, way to get excited. Unfortunately, some took our advice at face value. In late March this year  hedge fund Archegos Capital lost $20 Billion in two days doing exactly what we have described – making crazy levered bets on stocks like Amazon, Netflix, Expedia, LinkedIn, etc.! Credit Suisse, one of Archegos’ top lenders, reportedly lost $5.5 Billion due to the hedge fund collapse from underestimating the counterparty risk.

It all begs a question – why wouldn’t lenders use quantitative returns-based techniques to estimate the counterparty risk of opaque investments like some regulators do? Credit Suisse’s losses may have been preventable using the monthly P&L of Archegos that  could have pointed them to the leverage level of the fund. In cases like this a single margin call could bring down the entire fund, as happened with LTCM in 1998.

We don’t have access to the fund’s NAVs, but there are plenty of examples of how leverage and insider trading could be detected from monthly returns. What makes such top-down NAV-based or returns-based approaches attractive to both lenders and regulators is that it’s non-intrusive (doesn’t need proprietary data) and scalable (allows one to process thousands of portfolios or books at a time). These approaches address what is all too often a missing piece of the puzzle. As the Bloomberg article observed, “Hwang used swaps, a type of derivative that gives an investor exposure to the gains or losses in an underlying asset without owning it directly. This concealed both his identity and the size of his positions. Even the firms that financed his investments couldn’t see the big picture.”

As Risk.net said in it’s review of technology for market surveillance and counterparty risk: “This method allows firms to effectively deduce strategies at other firms and avoid potential counterparty risks, without being forced to wade through information.” (Criminal minds and increased surveillance: Risk.net)

One could only imagine what Archegos’s volatility looked like, but judging by the leverage level of x5 cited in the same Bloomberg article – and spectacular returns (from $200M to $20B) – we could  infer they were similar to Bitcoins’.

As if we needed a reminder, it turns out that leverage has its own pitfalls – and a margin call is even harder to stomach than a tweet from Elon Musk.